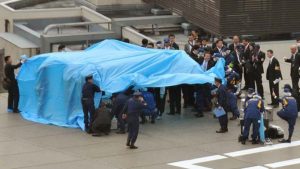 We waited a few extra weeks to do our annual update of the Fukushima nuclear disaster, hoping we’d have something positive to report–or at least that the news from Japan would stop getting worse.

Unfortunately, that’s not the case. So we’ll try to limit this year’s dose to less than the cumulative exposure to 15 chest X-rays–meaning we’re only going to tell you what’s happened this month. Here goes:

Earlier this month, eight water pumps at Fukushima had to be shut down due to a power outage. Tokyo Electric Power Co. (TEPCO), which still operates the crippled nuclear complex, admitted the shutdown resulted in the leak of radioactive water into the Pacific Ocean.

The pumps had been deployed in February to clean up about 100 tons of highly radioactive water that had leaked out of some of the hundreds of makeshift storage tanks TEPCO has erected around the complex. The storage tanks are needed to collect millions of gallons of radioactive water that have been poured over the melted reactor cores to keep them from overheating and reaching critical mass. When the tanks started leaking, TEPCO decided to pump the tainted water through a drainage channel and into an artificial bay they’ve created in front of the complex, enclosed by a fence.

Also this month, two reconnaissance robots mapping the insides of one of the crippled Fukushima reactors had to be abandoned inside the reactor after one got stuck and the other’s camera was damaged by radiation.

And last, but not least, about two weeks ago a small drone with a vial of radioactive material was found on the roof of the office of Japan’s Prime Minister, Shinzo Abe. The 50-cm-diameter remote-controlled device, which landed near the prime minister’s rooftop helicopter pad, was clutching a water bottle containing liquid with trace amounts of cesium. A 40-year-old Japanese man later turned himself in at police headquarters in Fukui Prefecture (also known as Japan’s “nuclear corridor,” because it is home to 14 coastal reactors), telling police the radioactive drone delivery was meant to protest Abe’s decision to gradually restart Japan’s 48 nuclear reactors beginning this summer. [All of Japan’s reactors were shut down after the March 2011 earthquake and tsunami caused the meltdown of three reactors at the Fukushima Daiichi complex].

The suspect said the cesium came from sand on a beach near the Fukushima complex. Japanese authorities are not certain how long the radioactive drone sat on Prime Minister Abe’s roof before it was discovered by an employee giving a tour of the building to potential recruits.

No word on whether any of the recruits withdrew their job applications after discovering their potential workplace comes equipped with accessories that have a half-life of 10,000 years.