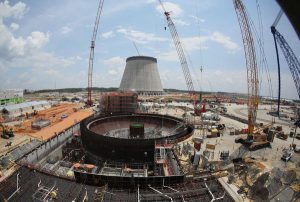 Much of the federal stimulus funding in the Great Recession was targeted at alternative energy projects, presented as a wise investment in a sustainable growth sector.

The U.S. Department of Energy magnanimously included nuclear power plants in its portfolio of renewable energy projects, despite the fact that a new reactor had not been built from scratch in the U.S. for more than 30 years. Ballooning construction costs–a new nuclear plant costs at least $10 billion–and the still-unresolved question of what to do with spent reactor fuel has kept the nuclear power industry from expanding for decades.

With its 2012 approval for two new reactors at the Vogtle nuclear power complex in Georgia, the Obama Administration sent a strong signal that the revival of nuclear energy would be a key component of its strategy to wean the nation off our dependence on fossil fuels.

When energy giant Southern Co. and its Georgia Power subsidiary broke ground on the Vogtle expansion in Waynesboro, GA, hopes were raised that this project would establish a new standard for cost-efficient modular construction of new reactors. Several other major utilities indicated they might reactivate long-planned nuclear power expansions based on the results at Vogtle.

Unfortunately, the results to date may induce them to put those blueprints back into mothballs.

Vogtle units 3 and 4 originally were supposed to be built for about $8 billion and come on line no later than 2017. But a recent filing by the utility with the U.S. Securities and Exchange Commission now concedes that the timeline for Vogtle has slipped by another 18 months and the original price tag is exponentially expanding. According to the latest estimates, both reactors won’t be online before 2020 and the overall cost of the project could top $15 billion.

The construction delays already have produced a lawsuit between the utility and the Vogtle contractors, Westinghouse Electric Co. and Chicago Bridge & Iron Co., over which party is responsible for the delays and who should bear the increased cost. The 18-month delay will add an estimated $1 billion to the cost of the 2,400-megawatt Vogtle expansion (including about $788 million in financing costs, which under Georgia law may be passed on to consumers).

“Simply stated, the delays in the schedule are because the contractor has not completed work as scheduled,” Georgia Power’s report said.

Industry analysts say the struggles at Vogtle may put the damper on other proposed nuclear power projects. Charlotte, NC-based Duke Energy has been planning an $11-billion expansion of the W.S. Lee Nuclear Station near Gaffney, SC, but reportedly has not yet committed to the project, which would use the same type of modular reactors as those under construction at Vogtle.

Which power player wins the race for our alternative energy future ultimately will be decided by the market for that type of energy. The recent rapid expansion of solar and wind power in the U.S. did not take off until those renewables became cost-competitive. Market forces ultimately will dictate whether nuclear power–an industry already hamstrung by the concerns raised by the Fukushima disaster–remains viable in the United States.

If the Vogtle project does not live up to its billing as a cost-effective way to build nuclear power plants, the two units at the plant could end being not only the first reactors to be completed in the past three decades, but the last to be built anywhere in the U.S.