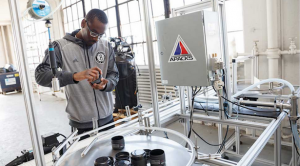 With the infusion of $1 billion in private investment, a long-neglected property on the Brooklyn waterfront will become a leading center of innovation and manufacturing, spurring jobs for nearly 20,000 people. Details of the plan for the redevelopment of Industry City—the largest privately owned industrial complex in New York City—were recently made public at an event sponsored by the Brooklyn Chamber of Commerce.

Industry City CEO Andrew Kimball unveiled details of the plan to transform the 16-building waterfront industrial complex in Sunset Park into one of the country’s premier centers for today’s rapidly emerging “innovation economy.” Implementation of the plan requires a rezoning to be considered through a public review process. Kimball played a leading role in the successful transformation of the Brooklyn Navy Yard.

The strategic redevelopment of the property—launched just over a year ago by a partnership consisting of Jamestown, Belvedere Capital and Angelo Gordon, along with Cammeby’s International and FBE Limited—included an initial $100 million investment that led to the leasing of 850,000 square feet of space and the creation of 1,500 jobs at Industry City.

Encouraged by the success of this initial investment, the property’s owners are now prepared to move forward with the larger redevelopment program. To actualize the plan for the innovation-era industrial complex fully, the private sector consortium is seeking permission from the City of New York to introduce new uses such as complimentary university-based academic facilities, additional retail amenities, and a new hospitality center with meeting space and hotel rooms to serve Industry City’s growing business community.

The innovation economy that would be supported in this space sets out to capture the full arc of making a product—from initial research and development, to engineering and design and the actual manufacturing and production by both traditional manufacturers and tech-driven “makers.” The industries that comprise the innovation economy—art and design, film and TV, fashion, tech and food—are New York City’s fastest growing sectors and offer good paying jobs that are highly accessible to people with a wide range of educational backgrounds and skillsets.

“The $100 million pilot implemented over the last year demonstrates that with new investment, Industry City can again be a major driver in the regional economy,” said Kimball. “This forward-looking initiative will transform Industry City into a wellspring of creativity, opportunity and economic expansion that generates tens of thousands of good jobs for New Yorkers. Within the foreseeable future Industry City will become a national model for urban innovation economy transformation.

“Innovation economy businesses are locating in urban, mixed-use areas near other complementary businesses, and they thrive on such critical amenities as transportation, retail, academic and research facilities,” he continued. “Building upon this strategic model, Industry City is poised to regain its status as a major economic driver for Sunset Park, Brooklyn and the City of New York.”

The plan will fully activate the long-dormant complex and spur creation of 13,300 direct, on-site jobs at the Sunset Park campus within 12 years. An additional 5,800 indirect jobs are expected to be generated off-site, benefiting Sunset Park, Brooklyn, and the other boroughs.

To bolster local hiring and expand the project’s reach beyond its walls, the plan includes an on-site employment center offering local residents pre-screening and job placement resources, entrepreneurship and small business services, and technology training. The center will include all of Industry City’s local workforce development partners as well as an academic partner that staffs the training facility.

“Our vision for Industry City restores and re-imagines a long underutilized relic for today’s innovation economy, opens the doors of opportunity for thousands of New Yorkers, and serves to revive Brooklyn’s working waterfront for generations to come,” said Kimball.

“Brooklyn’s innovation economy has been a driving force behind the rebirth of the borough, and Industry City’s groundbreaking plan will take us to a whole new level,” said Brooklyn Chamber President and CEO Carlo A. Scissura. “Not only will this proposal create almost 20,000 jobs, but it will provide an incredible home to Brooklyn’s world-renowned makers for decades to come and employ community residents from Sunset Park, Brooklyn and all of New York.”

Industry City is a collection of historic warehouse structures situated on the waterfront in Sunset Park, Brooklyn. The property’s owners are actively updating the complex, its amenities and its systems while cultivating a diverse tenant mix that fuses today’s burgeoning innovation economy with traditional manufacturing and artisanal craft. This work is paving the way toward a vibrant and diverse community of forward-thinking companies that support good-paying jobs for workers across skill and experience levels.