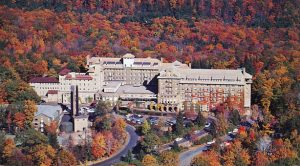 The Inn at Buck Hill Falls, situated in Barrett Township, Monroe County, PA, is slated to be sold along with its accompanying acreage via sealed bid. Located within a master plan approved community, the space has some infrastructure in place (for instance, the community has private water and sewer systems).

Sealed bid offers may be submitted at any time but must be received by March 30, 2015. Hollywood Real Estate Services L.L.C. will act as the administrator for the sale.

James Kazunas, president of Hollywood Real Estate Services L.L.C. commented, “This is a property that presents a wonderful opportunity for a variety of potential uses. It will be offered in whole or in part. The asking price has not been set and the property will be sold in a sealed bid format, with the Seller entertaining any and all viable offers from bidders. Complete terms and conditions of sale are available by contacting Hollywood Real Estate Services L.L.C.”

The settlement was founded in 1901 as a Quaker retreat by a group of Friends from Philadelphia and operated as a small wooden hostelry. Strategically located between New York City and Philadelphia, the facility expanded over the years and enjoyed popularity into the 1970s and 1980s. At one point, the property was named as one of the foremost convention centers in America. However, changes in ownership and financial troubles led to the closing of the Inn in the early 1990s. The property has been abandoned ever since, despite numerous attempts to resurrect it.

James Connelly, principal of Summit Commercial Real Estate LLC has been involved in numerous acquisitions and sales. Connelly notes, “The property, with its re-development potential, affords potential bidders a unique opportunity. The offering consists of improvements that include a former 400 room hotel along with approximately 138 acres, some of which are recorded residential building lots.”

In the aftermath of its closure, the Inn parcel has been subdivided to allow for the development of the site in two phases, including extensive renovation of the existing building. Future plans also include the creation of an initial subdivision that would result in single-family building lots and a parcel to house the equestrian center for the community.

The nearby villages provide many places to shop and spend time. While the community still retains the amenities of its past, a vibrant spirit surrounds Buck Hill Falls, a private resort community in the Pocono Mountains of Northeastern Pennsylvania.