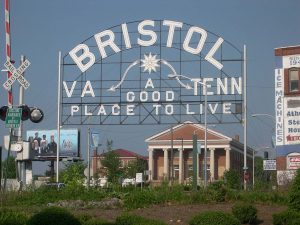 The cities of Bristol, VA and Bristol, TN are nearly identical twins not quite separated at birth.

The Bristols were both spawned by the same “parent,” a huge plantation on the Tennessee-Virginia border which was owned in the early 19th century by the Rev. James King. In 1852, when two railroads announced their lines would intersect in the middle of the King plantation, an aspiring economic developer from Blountville, TN purchased about 100 acres of the property and set about building a planned city–one of the first such endeavors in the young nation. Although 48 acres of his new tract were in TN and 52 acres were in VA, Joseph Anderson opted to create one new town, which he called Bristol, after the hamlet in England.

The subdivision of Bristol happened in 1856, when nearby landowner Samuel Goodson purchased the portion of Bristol north of Beaver Creek (the VA part) and consolidated it into a new development known as Goodsonville, later shortened to Goodson, VA. However, in 1890, the city fathers of Goodson decided to honor the historic roots of the community by renaming it Bristol, VA. Thus the twin cities of Bristol, VA and Bristol, TN came into being. It’s not a stretch to call them Siamese twins–the state line runs right down the middle of the main drag for both towns, State Street [due in part to its rather unique geography, Bristol, VA is the only city in Virginia not affiliated with a county].

Fast forward to the 21st century and it becomes clear that the two Bristols share more than a common heritage and the same main street (and a slogan: A Good Place to Live). Both of these communities have made a point of being among the first in the U.S. to embrace the latest tech trends.

Fifteen years ago, when broadband was a relatively new phenomenon, Business Facilities started tracking the emergence of “wired” communities. Both Bristols were in the forefront of this trend.

Bristol Virginia Utilities (BVU) started planning a fiber optic deployment in Bristol, VA in the late 1990s. By 2001, BVU had been granted approval by the Bristol City Council for a full deployment of one of the first “fiber to the premises” (FTTP or FTTU, as in fiber to the user) projects in the U.S. This pioneering effort to offer broadband Internet, cable TV and telephone service to the residents of Bristol successfully deployed a system known as a passive optical network (PON) linking more than 6000 local customers over the next two years.

Today, Bristol, VA boasts one of the most advanced broadband networks in the country, one of only a few existing FTTP deployments in the U.S. with a significant number of customers online. Not to be outdone by its twin across the state line, Bristol, TN also has deployed an FTTP system.

The Bristol, TN project is part of a Northeast Tennessee Valley initiative to make the region a magnet for data centers. With a robust fiber-optic network and high-speed broadband, the region is now home to one of the first Teir III-certified commercial data storage facilities in the U.S. Bristol, TN is one of 15 communities pre-certified by the Tennessee Valley Authority as a primary data center site, a designation based on accessibility, telecommunications infrastructure and adequate electric power availability.

While Bristol, TN ups its broadband game, the folks on the other side of the line in VA aren’t standing still. BVU received a $22.7-million grant from the federal National Telecommunications and Information Administration for the construction of a 388-mile fiber-optic loop that will span six counties and service 120 educational institutions and at least 500 businesses.

If you think the friendly tech one-upmanship between the Bristol twins will end when everyone on both sides of Beaver Creek signs up for 1-gig broadband service, think again. Now comes news that Bristol, TN is taking the tech battle to a higher level–meaning a higher altitude. According to a report in the Herald-Courier, Bristol, TN has become one of the first communities in the nation to integrate the use of drones into its economic development and marketing efforts.

A small “quadcopter” drone the city purchased for $1,200 is being deployed to shoot aerial video of available sites in Bristol. The city also is using the drone to provide video of newsworthy events to local TV affiliates. One of these drone-shot clips recently garnered national attention for Bristol: a spectacular view of the Bristol Motor Speedway covered with snow. From the drone’s-eye view, the mammoth NASCAR oval looked like a big, white “O” that probably is visible from the International Space Station.

Terri Talbert, community relations director for the city, told the Herald-Courier the decision to purchase the drone–which she calls “the aerial imager”–was spurred by the topography of an area filled with mountains and ridges, which made aerial filming of sites using piloted aircraft difficult. Talbert also told the newspaper the city takes great care to protect privacy and will only fly its drone over city property or parcels for which it has been granted permission by the owners. [Editor’s Note: last week, the FAA issued its rules for commercial use of drones, which are prohibited from flying higher than 400 feet and must always be within site of the operator; Bristol says its aerial imager already has been operating within those parameters.]

Kudos to the Bristol twins, who always manage to keep one foot in the future while the other is firmly planted in an historic venue that began as a railroad depot running through the middle of a farm. When somebody says you can’t have the best of both worlds, tell ’em to head for Beaver Creek. A Good Place to Live, indeed. 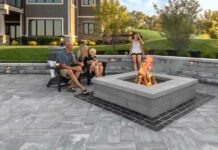 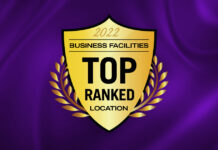