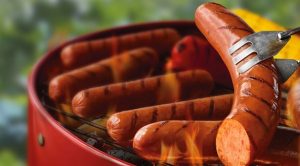 “John Morrell’s newest hub for logistics is coming to the Crossroads of America,” said Indiana Gov. Mike Pence. “Indiana’s central U.S. location and expansive logistics network, with thousands of railway miles and more pass-through interstates than any other state in the nation, makes Indiana the ideal base for companies like John Morrell that serve customers across the country.”

“We’re looking forward to beginning operations in our state-of-the-art facility in Hancock County, IN later this year and becoming active in that community,” said Scott Saunders, chief financial officer of John Morrell. “Both John Morrell and our parent company, Smithfield Foods, are strong believers in being good neighbors and giving back to the communities where we live, work and raise our families.”

“We are thrilled that John Morrell chose the Hancock County, IN site for its refrigerated facility in the Access 70 Business Park,” said Bill Bolander, president of the Hancock County Council. “This project became a reality because of the efforts of the board and team of the Hancock Economic Development Council.”