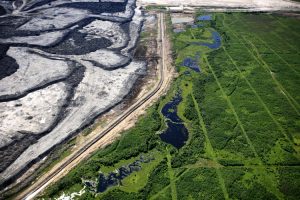 The majority leaders of the new Congress have announced their top legislative priority, which they say is such an urgent matter that immediate action is needed. They say they have the votes to pass this measure and pass it they probably will, long before Chris Christie and Jerry Jones do the tango during the Super Bowl halftime show.

Are our leaders in Washington going to repair the decrepit infrastructure of the United States, you ask? Raise the minimum wage so fast-food industry workers don’t have to subsist on cat food? Reinstate the Glass-Steagall Act, the repeal of which led directly to the global financial collapse of 2008?

Nah. Congress is going to approve the Keystone XL oil pipeline and dare President Obama to veto it.

For those who’ve been in a Rip Van Winkle trance for several years–or, like the rest of us, automatically cover your ears whenever a newscaster utters the word “Congress”–here’s some background:

The Keystone XL project would construct an oil pipeline that will stretch from Hardisty, Alberta in western Canada to Steele City, Nebraska.

If it’s built, the XL actually would be the second Keystone pipeline system. The first Keystone pipeline, with a capacity to deliver 590,000 barrels per day, was completed in 2010 along a meandering 2,147-mile route between Alberta and Nebraska. In 2011, the Keystone-Cushing extension was added, a 300-mile pipe connecting the Steele City outlet to storage and distribution tanks in Oklahoma. The 487-mile Gulf Coast extension of Keystone, hooking up the system to refineries in Port Arthur, TX, was completed at the beginning of last year. A lateral line to refineries in Houston should be ready by this summer.

Sounds like a complete system, right? Well, our friends in Canada decided along the way that their original tube just wasn’t big enough or fast enough. So they proposed the Keystone XL, a larger-diameter pipe (yes, XL stands for extra-large, like the long johns we’re wearing this week) that will duplicate the Alberta-to-Nebraska connection but take a more direct, shorter route. Keystone’s big brother will more than double the capacity of the system, shuttling an additional 700,000 barrels per day to Texas refineries.

Now here’s where things got a bit sticky. The stuff that Canada is pumping through the Keystone system isn’t pure light, sweet crude. It’s the filthy sludge that results from the extraction of oil from the tar sands of Alberta, a messy, expensive process that wasn’t possible until the technology was perfected five years ago.

In their haste to get this dinosaur muck to market, our friends up North decided to route the proposed XL pipe through the largest natural underground source of fresh water in the middle of America: the Ogallala aquifer, which sloshes under most of Nebraska and parts of several neighboring states. There’s a good chance that popcorn you’ll be munching when you watch Chris dip Jerry originated from stalks irrigated with Ogallala water.

Keystone XL became a political football soon after it was proposed. It was enough of a hot-button issue to deter President Obama from rejecting it on environmental grounds. Instead, Obama kicked the can to the State Department, whose approval is required for any construction across the international border. With an eye on the election calendar, State has repeatedly postponed a decision, saying it needs “more information.”

The GOP majority, given control of both houses of Congress by voters in the November election, says it has a mandate to approve Keystone XL as its first order of business. The new Senate majority leader, Mitch McConnell, and House Speaker John Boehner each are rushing a Keystone authorization bill to the floor as this is being written.

Go ahead and pass your pipeline bill, guys. Override the president’s veto, if you can. It doesn’t matter.

While the politicians have been kicking this issue back and forth, an historic paradigm has shifted which makes Keystone XL irrelevant. In the past six months, the price of oil has collapsed, from $100 a barrel to this week’s level of $48. The oil price has tanked due to the 5-million-barrel gusher of new production in the U.S. (primarily in North Dakota) combined with weak demand from struggling economies overseas.

Everyone expected the potentates in Saudi Arabia to respond to this collapse by doing what they usually do when oil prices drop: cutting production in their oilfields to balance supply with demand and prop up prices. Instead, the Saudis have declared an oil price war: they will maintain production at current levels until the price of a barrel of oil drops so far that only the lowest-cost producers can stay in the game. Oil industry experts, including the trade newsletter Platt’s Oilgram, predicted this week that prices may bottom out as low as $30 per barrel this year [memo to GM: is that rocket V-8 engine we ordered ready to ship?].

Ignoring the desperate pleas of their partners in OPEC, the Kingdom is wagering they’ll come out on top–a fairly safe bet since it only costs them about $10 per barrel to pull their crude out of the desert sands. Extraction of oil from the tar sands of Canada, by comparison, costs more than $60 per barrel.

Some white flags of surrender already are being raised. Several oil giants have signaled that active plans to put ultra-expensive rigs in the melting Arctic are being shelved. The next drop-out most likely will reside in Alberta: nobody’s going to pull oil out of the tar pits of western Canada if it costs far more to extract this sludge than you can get from selling it.

It says here that, regardless of what Congress does, Keystone XL will not be built. Even if it is laid down, the big tube will be filled with nothing but hot air, an appropriately empty monument to the unreality that rules our political circus in Washington. 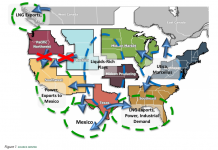 U.S. Natural Gas: In The Midst of A Change That Will Alter Flows, Prices 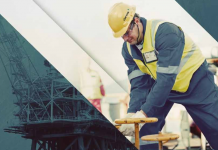 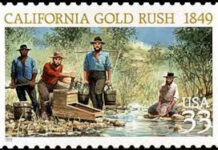