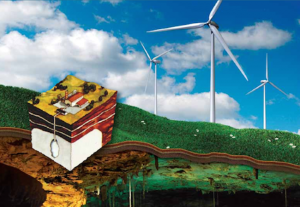 Just when we thought we’d heard every alternative energy scenario out there—from underwater tidal-basin-powered turbines to solar parking lot roofs to biofuels squeezed out of swamp grasses—comes a mega-project out West that could be a game-changer, assuming it’s actually built.

There’s an $8-billion wind-energy initiative emerging in California that envisions grabbing Wyoming’s wind energy and transmitting it to Utah, where it will be used to power pumps that will fill gigantic caves with compressed air, which in turn will run turbines that generate power for Los Angeles. No, we’re not making this up.

This proposed project–which would take nearly a decade to complete–would take the energy produced by a 2,100-megawatt wind farm in Wyoming and send it via a new 525-mile transmission line to Vernal, UT, where it will run giant pumps that will compress air and store it in four humongous underground salt caverns. During peak energy usage time in La-La Land, the compressed air would be released to spin turbines in Utah that will generate electricity to be sent via an existing transmission line to Southern California.

The four companies pushing this unique project–Pathfinder Renewable Wind Energy, Magnum Energy, Dresser-Rand and Duke-American Transmission–claim it can generate nearly 4,000 MW (a.k.a. 4 gigawatts), twice as much power as that which is generated by the Hoover Dam. The big dam on the Colorado River, built on the Arizona-Nevada border in 1936, produced an annual average of 4.2 million megawatt-hours of electricity from 1999 to 2008. The Wyoming-to-California project will produce 9.2 million megawatt-hours of juice per year, according to its backers.

Their proposal is scheduled to be submitted for approval next year to the Southern California Public Power Authority, which has been soliciting renewable energy projects to meet the state’s requirement for green energy. The California Energy Commission projects that energy demand in Los Angeles will increase by up to 18 percent by 2024.

Under the proposal, Pathfinder would build and operate a $4-billion wind farm near Chugwater, WY, about 40 miles north of Cheyenne. A Dresser-Rand facility in Utah would use air injected into the salt caverns to store power. Duke-American would build a $2.6-billion transmission line through Colorado, linking the wind farm and storage unit, projected to be completed in 2023. An existing 490-mile transmission line would deliver power from Utah to Los Angeles.

Duke-American is a partnership between Duke Energy and American Transmission Co., which bills itself as the nation’s first multi-state transmission-only utility; Pathfinder is a Wyoming-based wind energy player; Dresser-Rand pioneered geological compressed-air operations in 1991 with its Power South facility in MacIntosh, AL, one of the first such plants in the world.

The lynchpin of the Wyoming-to-L.A. sustainable energy scheme would be a massive $1.5-billion compressed air energy storage system using the salt caverns in Utah. Compressed air energy storage is said to be a relatively low-tech way to create a pressurized system that can be released as needed to generate electricity. Until recently, underground, utility-scale compressed air systems were used primarily to store energy from fossil-fueled power plants. Recent developments in compressed air technology include an isothermal system based on above-ground containerized modules, designed for use with grid-supplied energy.

Why not just put Wyoming’s wind power to use generating electricity for Wyoming, you ask? Well, according to the mega-project’s proponents, it’s too difficult to match the peak wind times in Wyoming to peak power-usage times in the Equality State. [Did you know Wyoming was the first state in the nation to allow women to vote, serve on juries and hold public office? Thus the nickname, one of our favorites].

You see, it’s very windy when the cowpokes are out on the Ponderosa corralling and branding their herds in Big Sky Country. But when the wind dies down and the ranchers hear the dinner bell ring and climb down from their saddles, they’re bone tired. So after filling their stomachs with bison stew (cooked over a wood fire, of course), it’s an hour of re-reading that ole Larry McMurtry novel by the light of a 50-watt lamp and then they hit the hay. (OK, we made that part up).

But here’s something we’re not making up and, frankly, it’s got us a bit perplexed. We recall an evening spent in a room on the top floor of a hotel next to L.A.’s international airport a few years ago. It was February, in the middle of a phenomenon the locals call the Santa Ana Winds. We didn’t get much sleep that night because the windows were rattling like freight trains.

So here’s what we want to ask our friends in L.A.: We know you’ve got a lot of wind down there. No insult intended, but wind turbines would be a scenic upgrade compared to the ugly oil wells that dot the landscape in your sprawling city. Instead of spending $8 billion to move wind energy down from Wyoming, wouldn’t it be a lot cheaper to install a couple of thousand more turbines locally? You can plug a bunch of them next to the beach in Malibu and watch the surfers go around them like NASCAR drivers. If you want to augment this power supply using the compressed air method, you’ve already got a storage facility–the big empty boat that’s sitting on the studio lot where they filmed Titanic.

We’re going to be watching this 1,000-mile-plus wind-energy fantasia unfold with great interest. If it succeeds, we can think of a number of places where we’d like to see this concept replicated.

For example, there’s a facility in Washington, D.C. that generates more hot air than anyplace else on Earth. It’s got a nifty dome that can more than accommodate a gaggle of wind turbines. These can be installed before the clowns who work there return from the campaign trail, where they’ve been polluting the airwaves for the past few months.

Just imagine if we can harness all that hot air and put it to use generating electricity for Americans all over the country. One filibuster alone could probably yield a gigawatt or two….well, you get the idea.