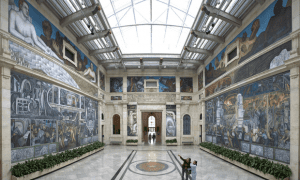 So they didn’t have to sell the art collection after all.

Loyal readers of this space know we’ve been paying close attention to Detroit’s financial difficulties, sometimes too close for comfort–like the day last year when we posted an upbeat prediction of Motown’s impending recovery, only to get hit in the face with a banana cream pie a few hours later as the city became the largest in history to file for bankruptcy.

So we’re doubly pleased to report that late last week–as predicted (hey, the pie was delicious!)–Detroit not only emerged from bankruptcy, but did it in a way that sets an inspiring example for the entire country.

The economic crater that Motown is climbing out of was deeper than a fiscal Grand Canyon. Detroit was already in intensive care, having lost a significant part of its population and tax base to urban flight, when it was clobbered by the double whammy of the global financial collapse and the coinciding near-death experience of the U.S. auto industry in 2008.

When it hit bottom, Detroit resembled a carpet-bombed European city at the end of World War II. Nearly 75,000 buildings, including entire neighborhoods, had been abandoned; police, fire and other public services were drastically–read dangerously–reduced; the foliage went unattended in city parks. The outlook was even gloomier: the city confronted nearly $18.5 billion in debts, most of them tied to pension payments for former city workers. Oh, and let’s not forget that the mayor who presided over this debacle was on his way to a federal prison, where he’ll spend the next 28 years paying his debt to society after being convicted on a cornucopia of corruption charges.

But in the darkest hours before the dawn, Detroit showed its grit, which none of us ever should have doubted. Motown, after all, provided the muscle that built the tanks and aircraft that won WWII. The rush to assemble the arsenal of freedom after the shock of the sneak attack on Pearl Harbor was the largest and fastest build-up of military might the world has ever seen.

Detroit, with a well-executed push from Michigan’s state government, rose to the occasion and met the bankruptcy challenge head-on. Taking a page out of former NY Gov. Hugh Carey’s playbook–Carey made Wall St. wizard Felix Rohatyn the fiscal czar of New York City when the nation’s largest metropolis teetered on the edge of bankruptcy in the 1970s–Gov. Rick Snyder boldly put a new manager in charge of reorganizing Detroit’s balance sheet.

Snyder took a lot of heat for what some called a usurpation of the democratic process, but it was the right thing to do, the only way to keep Detroit from drowning in its ocean of red ink. The governor backed the new manager with the full weight of his office, empowering him to make painful choices that could no longer be avoided.

The man who took on this thankless task, Emergency Manager Kevyn Orr, put in a masterful performance which emphasized deft and respectful negotiation over evisceration by diktat. Detroit’s city government was just eight weeks away from running out of cash in July 2013 when Orr, as directed by Snyder, took the city into bankruptcy. The revenue stream was a trickle–half of Detroit’s property owners had stopped paying their taxes and water bills, income taxes weren’t being collected (the collectors had been furloughed) and, with the city’s credit rating lower than the rusting hull of the Titanic, borrowing was out of the question.

Orr, a turnaround expert who played a key role in saving Chrysler from the scrap heap, deployed a host of innovative solutions to restructure Detroit’s debt and settle all of the claims against the city. We won’t get into the minutiae of the fiscal ballet here; suffice it to say that Orr, a homegrown graduate of the University of Michigan Law School, achieved at the bargaining table what could have taken years–maybe decades–to work out in courtrooms.

When the smoke cleared (or, more accurately, the graphite dust from hundreds of No. 2 pencils worked down to stubs), Orr managed to reduce Detroit’s debt load by a staggering $7 billion. His finely crafted and honorable settlement with former city workers–Orr convinced them to accept a 4.5-percent cut in payments–reduced Motown’s annual pensions nut to a (hopefully) manageable $500 million per year, while establishing a $1.7-billion fund to revive the city, remove abandoned buildings and upgrade public services.

Throughout the ordeal, Orr firmly kept his focus on the people he identified as his most important stakeholders: the residents of Detroit, the hardscrabble folks who didn’t head for the hills at the first sign of trouble in Motor City. At a critical juncture in the process, Orr decided to stop paying creditors to free up the little revenue that remained in the till for city operations, vital services and essential payroll. In doing so, he sent a strong signal to all involved that he wasn’t going to favor banks over people.

The Emergency Manager also decided he wasn’t going to grab the city’s assets and put them on the auction block, most notably Detroit’s impressive art collection. The famous auction house Christie’s valued the Detroit Institute of Arts’ collection at $867 million, making it a tempting target for a fire sale that could have wiped out a big chunk of municipal debt. The museum is run by a charity, but the city took ownership of the art in 1919 thinking the move would protect the collection from art speculators, which ironically put it in play almost a century later when the city’s coffers went belly up.

Orr took Detroit’s artistic treasures off the table, which is all you need to know if you want to measure the integrity of the man at the center of this fiscal emergency.

The federal judge who presided over the bankruptcy proceedings and approved the restructuring also should take a bow. Behind the scenes, Judge Steven Rhodes encouraged civic organizations–including numerous non-profits–banks and corporations with deep roots in the city to do their part to help make Detroit’s comeback possible. These civic leaders rode to the rescue like the cavalry of old, setting an inspiring example for the nation by pledging millions to Motown’s revival effort.

But the biggest kudos should be reserved for the people of this great city. In the darkest days of the fiscal calamity, the denizens of Detroit never threw in the towel. Instead, they came together like Joe Louis’ fist and did their best to fill in the gaps and defend the essence of their community.

We’ll never forget the sight of residents pulling out their lawnmowers and teaming up to trim the grass at city playgrounds. Others took over abandoned parks and planted vegetable gardens, creating farmers’ markets in a surreal landscape surrounded by urban decay. They planted seeds for future growth in the face of the most depressing entropy any American city has ever encountered. They never gave up, and their heroic efforts should serve as a wake-up call to anyone wallowing in the meme that the United States is in decline.

It says here Detroit’s greatest days are still to come. Put the pedal to the metal, Motown, and make those pistons roar!