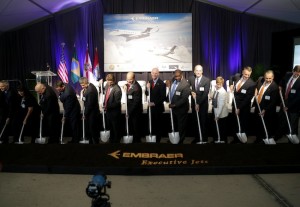 Embraer has broken ground on its Legacy 500 and Legacy 450 assembly complex in Melbourne, FL. At the ceremony, the Company celebrated this addition to its existing campus at Melbourne International Airport.

“With the support of Gov. Scott together with his team at Enterprise Florida, the Space Coast Economic Development Commission, Brevard County, the City of Melbourne, and the Melbourne Airport Authority, we are doubling the size of our Executive Jets campus in the U.S. with the addition of these game changing aircraft assembly facilities to the already operational Phenom assembly line,” said Embraer President and Chief Executive Officer Frederico Fleury Curado. “Furthermore, our recently inaugurated Embraer Engineering and Technology Center, the first engineering center outside Brazil, shows the strong level of commitment to our customers as well as our faith in this remarkable community.”

The new facility is expected to be operational by 2016. It will feature four new buildings: an assembly hangar, a paint facility, a completion center and flight preparation facility, and a new dedicated delivery center.

“With this state-of-art facility at the heart of an important aeronautical center in the region and the engagement of all stakeholders, we are very confident in the future of these programs,” said Marco Tulio Pellegrini, President & CEO, Embraer Executive Jets.

Embraer will add 600 new hires to its almost 400 employees in the area in a ramped up mode over a period of four years beginning in 2016. At the ground breaking ceremony, Florida Gov. Rick Scott said, “Embraer’s creation of 600 jobs is great news for Melbourne families and the surrounding community.”

“With addition of the Legacy final assembly and delivery program, Embraer will double its presence at Melbourne International Airport (MLB) by 2016,” said Greg Donvan, Melbourne International Airport Director. “The airport team is committed to an on-time aircraft rollout that is under budget. As a leading aircraft manufacturer, Embraer values the distinct advantages of our airport infrastructure and will benefit from the competitive advantages of being located in Florida’s Space Coast. Embraer’s success exemplifies why MLB is the nation’s fastest growing aerospace and aviation manufacturing center.”

“This major milestone takes us full circle, back to 2008, when ground was broken on Embraer’s first facility in Brevard. In six short years, Embraer has developed a footprint in our community that has significantly strengthened our standing as an aviation hub,” said Lynda Weatherman, president and chief executive officer, Economic Development Commission of Florida’s Space Coast. “This is a true economic development success story, one that has paved the way for growth in one of our community’s most important sectors.”

“While it was a community team that helped bring Embraer to the Space Coast six years ago, it is our people who have helped keep them here,” said Mary Bolin Lewis, District 4 commissioner and chairman of the Brevard County Board of County Commissioners. “How fitting that many years later, we are once again welcoming Embraer to the community. Instead of welcoming them for the first time, we are welcoming them back home. The third time is just as exciting as the first.”

“The Legacy assembly facility is the kind of coveted project every city hopes to land. Embraer is the high caliber corporate partner every city hopes will call their city home,” said City of Melbourne Mayor Kathy Meehan. “Our city is proud to be home to Embraer, and we congratulate them on their continued growth here.”

Secretary of Commerce and president & CEO of Enterprise Florida, Inc., Gray Swoope attended the event and spoke about Embraer’s impact on the state. “I want to thank Embraer for their continued investment in Florida. This highly sought after expansion is especially important as it will create additional opportunities for suppliers in the aerospace and aviation industry. We look forward to Embraer’s continued growth.”