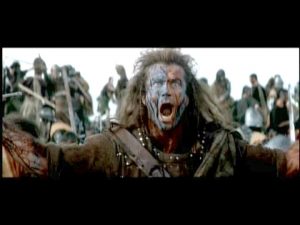 As this is being written, the people of Scotland are deciding whether to become an independent nation. By tomorrow, we’ll know whether Great Britain becomes Medium-sized Britain.

From our perch on this distant shore, it’s hard to pick a side in this kerfuffle. When we think of Scotland, the image that immediately comes to mind is a goggle-eyed Mel Gibson in Blue Man Group makeup screaming “I want my freedom!”

But then there’s that tender moment in The Queen, when the little girl gives Her Royal Highness the flowers and Liz thinks they’re for Diana, but actually…..well, we digress.

It’s been fascinating to watch the political tug-of-war over Scotland evolve (or, more accurately, devolve) over the past few years.

We strongly suspect that when Tony Blair set the whole thing in motion he assumed he’d reap kudos from the Scottish bastion of the Labor Party (sorry Liz, but we use American spelling here) without ever actually getting close to separating Scotland from the UK. [Memo to David Cameron: be careful what you wish for as you throw red meat to the Eurosceptics.]

As the campaign leading up to today’s vote on Scottish independence got underway, it seemed like the establishment in the UK held onto this laissez faire attitude almost until it was too late.

Then, instead of telling the people of Scotland why they would benefit from a continuation of the union, the leaping lords of London went into a full-blown panic. They launched a fear campaign that warned of an economic and geopolitical meltdown in an independent Scotland. It went something like this: “We’ll take the pound away from you, but we’ll keep your oil…”

As the election approached and the arguments hotted up (without anyone raising their voices, of course, since this is after all the British we’re talking about), the most elegant moment in the campaign was–not surprisingly–provided by Queen Elizabeth.

The “Yes” team had adroitly taken the crown off the table when they unilaterally declared that the monarchy still would reign supreme over an independent Scotland. But the ‘No” team responded, through its allies in the Fleet Street tabloids, with a whispering campaign suggesting that the Queen would be “heartbroken” if Scotland left the fold.

Elizabeth’s royal spokespeople tersely reminded everyone that the Queen is legally required to remain neutral on the independence question. When she finally deigned to speak about it a few days ago, Liz was the model of neutrality. She urged everyone in Scotland to keep their heads level in deciding which way to pull the lever.

Yeah, that sounds neutral, until you notice that the Queen issued this statement from her castle in Balmoral–in the Scottish Highlands. Hope Mr. Dewars doesn’t forget to bow on his way to the polls (hey, it might be safer to curtsy when you’re wearing a kilt).

So we don’t have a firm opinion on Yes or No for Scotland, but we note with interest that the Yes campaign is having an intriguing ripple effect in far-off places. For example, Catalonians in Spain are holding rallies cheering on the independence-minded Scots. They hope a Yes victory in Scotland is a precursor to a similar referendum in their region.

If you count the number of disputed territories that resulted from the haphazard map-drawing by the victors at the end of World War I, you’ll run out of fingers and toes long before you complete the list of people who hate each other but are forced to live in the same country. Or, for that matter, people of similar ethnicity who yearn to live in one country but have been subdivided by arbitrary lines on a map.

It would be an interesting experiment indeed to declare a global “Self-Determination Day” and let every hamlet on Earth decide which country they want to affiliate with, at least symbolically [aiming a howitzer at them while they vote is prohibited, Vlad].

America could join the party by letting states and counties vote on who wants to be on the same team inside the U.S. No doubt Betsy Ross would have to pull at least a dozen new stars out of her sewing basket. North California, anyone? South Jersey? And a question that has confounded scholars for centuries finally will be answered:

Who’s got dibs on Staten island?