By Jack Rogers
From the July/August 2014 issue 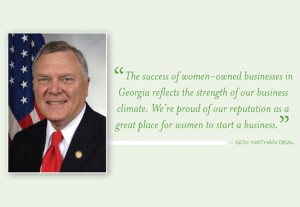 They’re growing a lot more than peanuts in Georgia these days. More than 11 leading film and television studios are breaking ground for new studios or expanding in the Peach State. Thousands of new Kia sedans are rolling out of the Korean automaker’s U.S. assembly plant in West Point, GA, and Baxter’s new $1-billion biotech complex near Atlanta will include a world-class biotechnology training center.

What are the keys to this success? In a recent exclusive interview with Business Facilities, Gov. Nathan Deal told us that drivers for growth in GA include a solid transportation and logistics infrastructure, a skilled workforce and pro-business incentives.

Georgia recently was cited as having the fastest growth of firms owned by women, which Gov. Deal attributes to an all-inclusive business climate.

“The success of women-owned businesses in Georgia reflects the strength of our state’s business climate,” he told BF. “The state is well known as the home of many Fortune 500 companies, but we’re proud of our growing reputation as a great place for women and minorities to start a business. The resources and incentives that Georgia provides encourage business growth of all kinds.”

MATCHING JOBS WITH SKILLED WORKERS IS A TOP PRIORITY

The Governor’s Office of Workforce Development recently was put under the umbrella of the Georgia Department of Economic Development (GDEcD). We asked Gov. Deal why this consolidation was necessary.

“Georgia’s Office of Workforce Development (GOWD) is tasked with matching job openings in our state with a skilled workforce,” he explained “For this reason, I made the decision to administratively attach GOWD to GDEcD. This move is an opportunity to ensure that the state’s workforce development efforts are aligned with the state’s economic development efforts. By aligning GOWD and GDEcD, the state gains an enhanced ability to attract new business and to ensure that existing industry continues to thrive in a business-friendly environment.”

The availability of skilled workers is a top priority for the Deal Administration.

“The economic development community in Georgia has heard repeatedly from the private sector that one of the greatest challenges facing businesses in Georgia, nationally and globally, is the need for a consistent, trained and reliable workforce,” the governor told us.

Gov. Deal created the High Demand Career Initiative (HDCI) to allow those involved in training Georgia’s future workforce—including the University System of Georgia (USG) and the Technical College System of Georgia (TCSG)—to hear directly from the private sector about projected workforce needs up to 10 years in the future. This will allow those involved in workforce development in Georgia to quickly develop the necessary tools, Deal explained.

“Where the [tools] do not currently exist, USG or TCSG will commit to partner with the companies to meet those needs as quickly as possible, where appropriate and feasible. GDEcD’s Workforce Division will coordinate this collaborative effort,” the governor said.

Gov. Deal recently led a trade mission to Israel. For nearly two decades, Georgia has had a partnership with Israel through government, friendship and business. From 2012-2013, Georgia’s trade with Israel increased by 71 percent. Approximately $4 million worth of Georgia peanuts and pecans have been sold to Israel as part of a federally funded program to attract international buyers to the state.

The Georgia Ports Authority in Savannah has an established relationship with Israel, offering two weekly shipping services to the Port of Haifa and one to the Port of Ashdod, and Delta Air Lines offers multiple daily flights from Atlanta to Tel Aviv via New York and Amsterdam. Georgia is Israel’s top trading partner in the southeastern U. S., and the Peach State ranked eighth in the nation in terms of total trade with Israel in 2013. While on the mission to Israel, Gov. Deal announced that Haifa Group will locate to Savannah, creating 20 jobs and investing $12 million.

“It isn’t enough to simply promote Georgia from within the state, which is why we have international representatives that have professional, first-hand knowledge of companies that are looking to relocate to the U.S.” he said. “Last year, we celebrated our 40th anniversary of having an operating office in Tokyo. Our office in Seoul has been operating for 30 years. We’ve been able to maintain these offices through tough economic times. This may be the single most important thing we have done to continuously attract foreign direct investment from these regions.”

Gov. Deal told BF he’s optimistic that a project to deepen the Port of Savannah will get moving before the expanded Panama Canal reopens next year.

“The federal enactment this year of a new water resources law cleared the final hurdle for the deepening project at the Port of Savannah,” he said. “The state is working with the Corps on a contractual agreement which will allow us to get the project moving as soon as possible. It’s our hope to have that contract signed by the end of the summer, which may allow us to move forward with work by the end of the year.”

Georgia has put aside $266 million for its share of the project and is willing to use its money to get the process started, if necessary, Deal added.