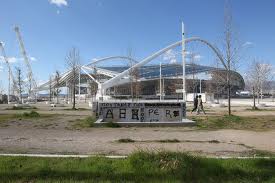 Brazil has spent at least $4 billion to build from scratch or refurbish the dozen stadiums that are hosting the 2014 World Cup. It will spend billions more to get additional venues ready for the 2016 Olympics in Rio.

But the experience of other countries who rushed to build stadiums for global sporting events suggests that after the games end these gleaming new sports palaces may turn into ugly white elephants–or worse. Here’s a sampling of some of the unseemly postscripts–financial or otherwise–that haunted Olympics or World Cup venues after the closing ceremonies:

Montreal’s Olympic Stadium, built for the 1976 Summer Games, originally was nicknamed “The Big O,” a reference to its shape. For more than three decades afterwards, this was universally adjusted in Canada to “The Big Owe,” a reference to the huge financial hole left by the 1976 Olympics.

Since the baseball Expos moved to Washington D.C. in 2004, The Big Owe has not had a primary tenant. A huge tower adjacent to the stadium, built to open and close the retractable roof, now has the sole purpose of storing the roof (which is no longer retractable) to keep it from collapsing into the stadium.

China’s famous Bird’s Nest, centerpiece of the 2008 Beijing Olympics (and designed by one of the PRC’s most famous dissidents, Ai Wei Wei), today is a mostly empty “museum piece,” in the words of an unnamed Beijing resident interviewed recently by Bloomberg News. The Bird’s Nest cost $480 million to build, takes $11 million per year to maintain, and, like The Big Owe, has no regular tenant.

When Sarajevo hosted the 1984 Winter Olympics, its venues for the Games were the pride of Yugoslavia. Ten years later, Yugoslavia no longer existed and many of these sports venues were destroyed during the bloody civil war in Bosnia.

Less than eight years after the Olympic Torch was extinguished in Athens in 2012, the facilities that hosted the Games are graffiti-covered relics, most of which stand unused while Greece recovers from its financial collapse.

Perhaps saddest of all was the fate that befell the Olympic Village in Estal, west of Berlin, which housed more than 4,000 athletes during the 1936 Summer Games. The Village in Estal suffered through an ignominious epilogue: during World War II, it was used as a military barracks–first by the Germans and then by the invading Red Army.

As the costs of building these one-time mega-complexes continues to skyrocket–Brazil may end up spending more than $30 billion in total for its World Cup and Olympics facilities–perhaps it’s time for all nations to come together and pick a permanent venue for each of the world’s quadrennial sports festivals.

Make it world-class, cutting-edge, state-of-the-art, packed with all the latest glitzy bells and whistles. And then make sure that four years later, and four years after that, etc., we use it again.