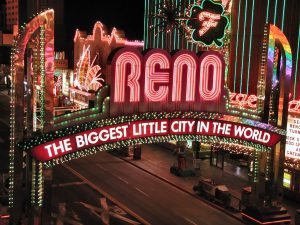 As numerous states continue to grapple with long-term budget woes (including huge unfunded pension obligations), many are turning to a quick fix with a seemingly guaranteed return: the expansion of all forms of gambling.

A visit to votesmart.org offers a wide-angle view of the enduring lure of tax revenues generated by casinos and other forms of state-sanctioned gambling. The website features a page that tracks state ballot initiatives involving the expansion of gambling (and no, we don’t call it “gaming” in New Jersey).

The votesmart.org tally shows that since 2008 a dozen states have held a total of 30 statewide referendums proposing to expand gambling. Several states on the list keep going back to the table, putting down a bet and spinning the wheel: Maine and Oregon have put gambling initiatives to their ballots five times since ’08. In ME and OR, it appears that state legislators don’t want to take “no” for an answer: in each state, four of the five gambling initiatives failed to win approval from voters.

In New York, Gov. Andrew Cuomo has spent much of his first term trying to win approval for new casinos in the Empire State. Voters finally agreed in a 2013 referendum. Across the river in NJ, Gov. Chris Christie has attempted several rescues of the Garden State’s ailing Atlantic City casino industry, providing more than $200 million in tax breaks to finish construction on the $1-billion white elephant known as the Revel and ordering state troopers to augment AC’s police force.

Christie also pushed through the legalization of online gambling in NJ, but so far the tax windfall envisioned from people playing online poker in their pajamas has not materialized. Despite that setback, NJ is anticipating a huge jackpot if it succeeds in convincing the U.S. Supreme Court next year to let it break Nevada’s monopoly on sports gambling, already approved by NJ voters. State Senate President Steve Sweeney told us a few months ago that legalized sports gambling could generate more than $2 billion annually for NJ coffers.

Which brings us to an interesting question: when so many states are jumping into the casino business or expanding it, what happens to the locations who long ago staked their existence on a monopoly over the slots and tables racket?

The answer can be found in Reno, NV, which bills itself as “The Biggest Little City in the World.” Until recently, the primary reason to go to Reno was the opportunity to always find an open seat at a serious poker game (warning: don’t check and raise on those buried aces) and a great $10 steak without wading through the throngs of tourists in Vegas. That, and maybe a quick side trip to Tahoe for some fresh air.

Well, Reno is busy planning a future beyond gambling. The Biggest Little City still plans to focus on chips, just not the kind you sweep off the table after a winning hand: Reno has put down a marker that it intends to be one of the leading high-tech hubs in the U.S.

Instead of a never-ending quest to replicate Vegas’ famous Strip, Reno is opting for Startup Row, a string of e-Commerce ventures that is drawing from an overflow of techies flocking to the city’s biggest recent prize–Apple’s new data center. One example is Zulily, an e-Commerce firm that sells home decor and women and children’s clothing, which announced plans in May to double the size of its warehouse and hire 600 people.

Reno also is vying to become a leading test center for drones and, according to an article in this week’s New York Times, is in the running for what likely will be the biggest economic development prize of the year: Tesla’s lithium battery plant, from which the electric carmaker intends to supply batteries to the entire U.S. automotive industry.

To lure new high-tech ventures, Reno is emphasizing its proximity to Silicon Valley (the city is a four-hour drive from San Francisco) and the fact that Nevada is a state with no corporate or inventory taxes. The seeds for the city’s high-tech future actually were planted nearly a decade ago, when a Microsoft licensing unit and an Amazon distribution center chose to locate there. The future high-tech labor pool began to arrive at the same time, as thousands of Californians (including, no doubt, scores of certified tech geeks) began migrating to neighboring states in search of a lower cost of living and a less-congested lifestyle without the infamous 3 p.m. traffic snarls on the Golden State freeways.

Reno got clobbered by the Great Recession, hit by a double-whammy of shriveled tourism and a decimated housing market. Unemployment in the city peaked at 13.4 percent in 2010. But, as anyone who has ever pushed a few chips across a felt table in the Biggest Little City surely knows, eventually the bad luck will turn and that last card will deliver a royal flush. Today, Reno’s unemployment rate has dropped to 7.1 percent, it’s housing prices are rising and just about every week brings the arrival of a new tech company.

It says here that Reno is holding a strong hand which will be rewarded with the jackpot of a bright and prosperous future. Bet the farm on it.