According to the report “Smart Cities Market – Global Industry Analysis, Size, Share, Growth, Trends and Forecast, 2013 – 2019,” the global smart cities market is expected to reach a value of $1,265.85 billion by 2019, growing at a CAGR of 14.0% from 2013 to 2019. The increase in migration from rural to urban areas is the major factor responsible for the growth of smart cities market, globally.

North America was the largest contributor to the smart cities market and accounted for a share of 34.5% in 2012. This is mainly attributed to the increase in smart grid investments and upgrades in the water infrastructure and transportation sector. Consequently, the U.S. smart cities market is expected to reach a market size of $392.41 billion by 2019. Regional governments are taking steps towards reducing the carbon footprint by increasing the use of renewable energy resources. Governments in North America are currently working on an objective to accomplish the target of zero wastage of energy by the year 2020. 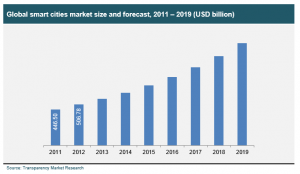 Among the different application categories, the smart transportation segment held the largest share of around 16% in 2012. This was due to the growing demand for advanced traffic management, building a superior environment and reducing the volume of delivery vehicles. At the same time, smart transportation links the modes of transport to improve the traffic flow in both urban and inter-urban networks. Smart transportation systems help minimize the economic burden of government by reducing traveling delays and fuel consumption rate.

Smart security is the fastest growing segment and is expected to grow at a CAGR of 15.0% during the forecast period from 2013 to 2019. One of the reasons for the growing popularity of smart security is that it avoids third party misuse by imposing high security requirements onto the used technology.