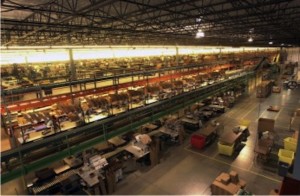 Kentucky Gov. Steve Beshear has announced eBay Enterprise, an eBay Inc. company, plans to expand operations in Boone County, creating more than 300 new, full-time jobs and investing nearly $52 million in the Commonwealth. eBay Enterprise’s expansion will include a new fulfillment center in Walton. It will be the company’s third northern Kentucky facility.

“This is a remarkable investment in the Commonwealth, with eBay Enterprise spending $52 million to expand its footprint in northern Kentucky. This announcement is further proof Kentucky provides a strategic location for companies to ship their products around the world,” said Gov. Beshear.

eBay Enterprise has fulfilment operations in Walton, Louisville and Shepherdsville, employing more than 1,200 people across the state. The company is expanding to meet rising customer demand. The new facility is expected to open this summer.

“Kentucky plays an important role in the success of eBay Enterprise and the clients we serve,” said Tobias Hartmann, interim president of eBay Enterprise. “Our employees are excited about the new facility. Through their efforts, we’re able to provide our world-class brands and retailers with the capacity, speed and scale needed to deliver packages quickly to consumers across the nation.”

To encourage the investment and job growth in Walton, the Kentucky Economic Development Finance Authority preliminarily approved the company for tax incentives up to $2.3 million through the Kentucky Business Investment program. The performance-based incentive allows a company to keep a portion of its investment over the term of the agreement through corporate income tax credits and wage assessments by meeting job and investment targets.

“eBay Enterprise is creating hundreds of new, good paying jobs for the residents of Boone County, as well as investing more than $52 million in new, state-of-the-art equipment and startup costs,” said Sen. John Schickel, of Union. “This project will put a lot of northern Kentuckians to work.”

Located at the center of a 34-state distribution area, Kentucky facilitates the distribution of goods and materials to a massive industrial and consumer market. Kentucky’s borders are within 600 miles of over 65 percent of the nation’s population, personal income and manufacturing establishments. The state ranks third in the nation in total air cargo shipments.