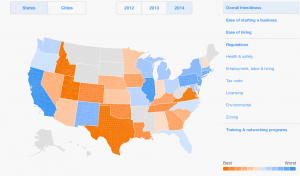 More than 12,000 entrepreneurs nationwide participated in this year’s survey. The Thumbtack.com Small Business Friendliness Survey  ranked 82 cities and most states on what makes a positive environment for small businesses.

“Creating a business climate that is welcoming to small, dynamic businesses is more important than ever, but rarely does anyone ask small business owners themselves about what makes for a pro-entrepreneur environment,” says Jon Lieber, chief economist of Thumbtack.com. “Thousands of small business owners across the country told us that the keys to a pro-growth environment are ease of compliance with tax and regulatory systems and helpful training programs.”

Some of the survey’s key findings include:

“It is critical to the economic health of every city and state to create an entrepreneur-friendly environment,” said Dane Stangler, vice president of Research and Policy at the Kauffman Foundation. “Policymakers put themselves in the best position to encourage sustainable growth and long-term prosperity by listening to the voices of small business owners themselves.”

Complete results can be seen here and include full sets of rankings and dozens of easily searchable quotes from small businesses nationwide. Each state and city also has its own data visualization showing its detailed survey results.

Thumbtack.com surveyed 12,632 small businesses across the United States. The survey asked questions about the friendliness of states and cities toward small business, such as:

Thumbtack.com and the Kauffman Foundation evaluated states and cities against one another along more than a dozen metrics. The full methodology paper can be found here.