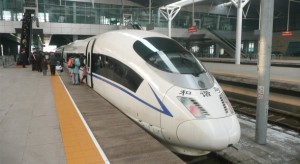 Russia and China, two former Communist monoliths who share an authoritarian, top-down approach to capitalism, are going in different directions on ties to the West.

In the wake of Russia’s thuggish annexation of Crimea and the U.S.-led sanctions that followed, Vladimir Putin has sent a not-so-subtle message that the days of U.S.-Russia cooperation are coming to an end.

NASA said Wednesday it received no notification before the public declaration from Moscow of Russia’s decision to cut off its ferry service to outer space. Private firms like Elon Musk’s SpaceX venture, which has successfully rocketed cargo to the Space Station, presumably will have to step into the void and develop a manned-capsule service.

While Putin has begun dismantling Russia’s connections to the West, China has boldly signaled it’s planning to build some extraordinary new links to the U.S. and Europe. According to a report from the state-run China Daily (also published in the Beijing Times), the PRC is “seriously considering” building an 8,000-mile high-speed rail network that would connect China with the U.S.

The bullet trains would originate in Beijing, travel through a new 125-mile underwater tunnel across the Bering Strait into Alaska, and then wind their way down through Canada into the U.S. Traveling at 220 m.p.h. on the rail link, a passenger could arrive in the U.S. from China in less than two days.

The proposed underwater tunnel would be about four times longer than the one currently spanning the English Channel, but the China Daily report claims the PRC already has the technology to build it and will demonstrate this prowess soon in a tunnel planned to connect China’s Fujian province with Taiwan.

According to the Beijing Times, the China-to-America rail line is one of four large-scale international high-speed rail projects the PRC wants to build:

The first reportedly will originate in London and run through Paris, Berlin, Warsaw, Kiev (where the Ukrainians will get off) and Moscow before splitting into two routes, one heading into China through Kazakhstan and the other up into eastern Siberia.

The second will begin in the western Chinese city of Urumqi and run through Kazakhstan, Uzbekistan, Turkmenistan, Iran and Turkey to Germany. The third will connect southwest China with Singapore.

But the Wall Street Journal threw some cold water on this news when it noted that all of the information on these incredible projects is coming from the same source–Wang Mengshu, an academic at the Chinese Academy of Engineering and a professor at Beijing Jiaotong University’s tunnel-and-underground-engineering research center.

Mr. Wang apparently has been making grandiose statements about impending mega-projects for more than four years. According to the WSJ, he started making noise about the London-to-Beijing rail link in 2010, but later admitted that financing would be the biggest hurdle to bringing the project to fruition–and he had no idea where the funding would come from.

Regarding the proposed China-to-America rail line, we’ll point out an obvious problem that may loom even larger than raising funds to build it: any high-speed rail link from Beijing to the U.S. will have to pass through Russia, where Vladimir Putin controls everything, including the speed limits for trains.

Time for some “signal problems” in Siberia, Vlad?