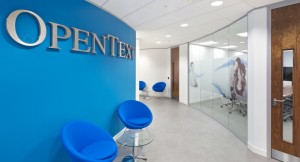 “I am thrilled that OpenText, a made-in-Ontario success story, decided to carry out this expansion here,” said Kathleen Wynne, Premier of Ontario. “We are proud to partner with OpenText to help create good jobs in Ontario and build a brighter future for our province.”

More than 30 percent of the jobs created will be in R&D and 10 percent will be for youth in the province, those 29 years old and under.

“Ontario’s technology sector has established a tremendous momentum that has positioned the province front-and-center as business leaders around the world make decisions about where to invest and grow,” said Dr. Eric Hoskins, Minister of Economic Development, Trade and Employment. “OpenText’s decision to invest and create jobs here in Ontario is a vote of confidence in our tech sector and in the talented people who help it thrive and grow. This is about advanced technology, but it’s also about everyday people—ensuring families have stable employment and young people in school have prospects when they graduate.”

In addition to expanding OpenText’s footprint at its corporate headquarters in Waterloo and its Ottawa offices, the company also announced the future site of its worldwide customer briefing center and offices in the heart of downtown Toronto. OpenText Ontario offices include worldwide headquarters in Waterloo, operations in Richmond Hill, worldwide customer briefing center in Toronto (to open late summer), Ottawa, Peterborough, and Kingston for research and development. Nationwide, offices include Montreal and Calgary.