By Jonathan Sanders
From the March/April 2014 issue 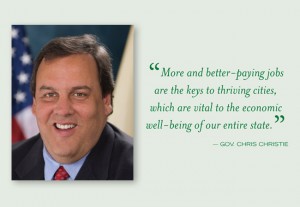 The new law builds on Christie’s commitment to revitalizing New Jersey’s cities. It places extra emphasis on spurring development and private-sector job growth in new Garden State Growth Zones (GSGZ) identified in the legislation as the four lowest median family income cities in the state: Camden, Trenton, Passaic and Paterson. Projects in these cities will have significantly lower eligibility thresholds and higher incentive levels. They also will be eligible to give property tax abatements for new development, allowing cities like Camden to spur development and compete with Philadelphia for private-sector jobs and residential growth.

“Not only will this encourage more companies to create jobs throughout New Jersey, it will also give an extra boost to some of our biggest cities,” Gov. Christie said. “More and better-paying jobs are the keys to thriving cities, which are vital to the economic well-being of our entire state.”

The New Jersey Economic Development Authority (NJEDA) recently approved the first projects under the revised Grow NJ program to encourage businesses to increase employment in New Jersey. These five projects—located in Camden, Neptune, Bridgewater, Newark and Jersey City—are slated to receive a total of approximately $92.9 million tied to the creation of 900 new full-time jobs and the retention of 925 existing full-time jobs in New Jersey.

NJEDA approved a significant Grow NJ award of up to $39.5 million over 10 years for Valeant Pharmaceuticals International, Inc., which recently acquired Bausch & Lomb, whose core businesses include ophthalmic pharmaceuticals. Valeant is in the process of determining where in New Jersey to locate the company’s combined U.S. headquarters. One NJ option is a leased facility in Bridgewater; 274 jobs would remain in the state and 550 jobs would be created.

NJEDA approved a Grow New Jersey award for WebiMax, a leader in online and digital marketing services that was founded in 2008 in Mt. Laurel, NJ. The company earned the number five position on the 2013 Agency 100 list, an annual ranking of the fastest-growing advertising and marketing agencies in the U.S.. To accommodate its rapid growth, WebiMax considered relocating its existing workforce to Newark, DE. A Grow NJ incentive worth up to $12.7 million over 10 years encouraged the company to relocate to Camden. The project involves the creation of 100 new jobs and the retention of 50 jobs at risk of leaving the state.

The WebiMax project was eligible for an increased award due to its location in a Garden State Growth Zone. Marathon Data Operating Co., LLC was approved for a Grow NJ award of up to $3.2 million that included a bonus for locating the project in Neptune, NJ. The company provides office management, fully integrated cloud-based field force automation software and marketing services solutions to the pest control, HVAC and plumbing industries. The company’s plans call for the creation of 35 new jobs to support its significant growth over the past few years.

A Grow NJ award worth up to $24.3 million over 10 years was approved for IDT Corp. to encourage the company to maintain its headquarters in Newark, NJ over a competing location in Pearl River, NY. IDT is focused on consumer services with operations primarily in the telecommunications and payment services industries. The company’s Newark project received a bonus for being located in an Urban Transit Hub municipality; it involves the retention of nearly 530 full-time jobs employees and the creation of 40 new jobs.

Another business that received a bonus for choosing to locate its project in an Urban Transit Hub is VF Sports- wear. The lifestyle apparel and footwear company was approved for a Grow NJ award of up to $13.1 million over 10 years to encourage the company’s relocation from New York City to a new facility in Jersey City instead of Norwalk, CT. Several senior executives as well as finance, accounting, retail operations and other administrative groups are among the 175 jobs to be relocated to the Garden State.

The ERG program is an incentive for developers and businesses to address revenue gaps in development projects, defined as having insufficient revenues to support the project debt service under a standard financing scenario. It can also apply to projects that have a below-market development margin or rate of return. The grant is not meant to be a substitute for conventional debt and equity financing, and applicants should generally have their primary debt financing in place before applying. In order for a project to be approved, it needs to undergo a rigorous analysis of the sources and uses of funds, construction costs and projected revenues. All of these metrics are compared to industry standard measures.

The program is applicable to residential projects that do not generate tax revenues but can qualify for tax credits that can be assigned to lenders for project financing. A tax credit of up to 20 percent of total project cost and a bonus of an additional 10 percent (for a total of 30 percent) is available if the project constructs and reserves at least 10 percent of the residential units for moderate income housing. Aggregate tax credits available to qualified residential projects under ERG are limited to $600 million.

For commercial projects, an incentive grant reimbursement of up to 20 percent of total project cost is available, with bonus funding contingent on project type and location.