Home » Site Selection » Business Clusters/Corridors » For Whom the Road Tolls 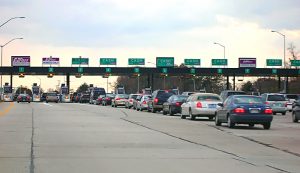 The U.S. Interstate Highway System was one of the most impressive engineering feats of the 20th century and arguably the greatest accomplishment of President Dwight D. Eisenhower.

In the 30 years that followed Eisenhower’s signature on the Federal-Aid Highway Act of 1956, 46,876 miles of superhighway were built from the Atlantic to the Pacific at an estimated cost of $129 billion, the largest public works project in history.

Ike’s motive in pushing through the creation of the Interstate Highway System had little to do with making it easier for a family from Dubuque to visit the Grand Canyon or a legion of developers to extend the reach of suburban sprawl.

When he was the Supreme Allied Commander in World War II, Gen. Eisenhower was supremely impressed with the autobahn system in Germany. The network of ultra-wide superhighways in Deutschland had made it much easier for the Wehrmacht to move its tanks across the country quickly, positioning them for the Blitzkrieg across Europe.

The idea of defending the United States from a land invasion by moving thousands of tanks rapidly across the country may seem preposterous today, but it was considered a national security priority in the 1950s. In fact, the federal government’s official name for our national road system is the Dwight D. Eisenhower System of Interstate and Defense Highways.

However, while Ike was focused on national defense, Congress kept its eye on — what else? — making sure the taxpayers at home were really pleased with their grand new public works project. So while states technically were given ownership of their pieces of new federal highway, Congress voted overwhelmingly in 1956 to ban tolls throughout the Interstate Highway System.

Fast-forward to the 1990s, when the U.S. created another kind of superhighway system–one whose impact on our society is even more profound than Ike’s Interstates. And like the concrete-and-asphalt ribbons of road that were built under the 1956 program, the virtual superhighway that came together in the ’90s also was spawned in part to address one of the Pentagon’s top priorities.

Vladimir Putin wasn’t completely off his rocker when he recently claimed the Internet was a “CIA project.” Actually, the creation of today’s World Wide Web was given a significant boost from the Defense Department’s secret DARPA research program. The project initially aimed to connect our most sensitive military research labs.

Another similarity between the Internet and the Interstate Highway System is that, from the very beginning, tolls also were prohibited on our digital superhighway.

We don’t know whether candidate Barack Obama ever took a firm position on highway tolls when he first ran for president in 2008. But then-Sen. Obama was quite vocal in support of preserving net neutrality, the ideal that everyone should have the same access to the wonders of high-speed broadband.

Well, this week comes word that President Obama apparently has had a change of heart about both kinds of tolls.

The FCC has signaled it’s preparing to abandon the net neutrality that has governed the Internet since its inception. The federal communications agency reportedly is ready to approve the creation of special “high-speed lanes” for giant broadband consumers like Google and Netflix, who will pay hefty fees to service providers like Comcast and Verizon for access to these new digital HOV speedways.

Yesterday, the other shoe dropped: the Obama Administration has quietly notified Congress it is proposing to eliminate the prohibition on tolls on the Interstate Highway System.

At first glance, the justification for both of these reversals may seem reasonable.

Regarding digital tolls, there’s no denying that popular web portals like YouTube (owned by Google) and Netflix consume nearly half of the bandwidth in the known universe to satisfy our insatiable need to view stupid cat videos, the complete archive of Mad Men episodes and similar staples. So the Web giants should pay more to service their need for speed, right?

Regarding highway tolls, lifting the 1956 ban will help address a critical shortfall in the federal Highway Trust Fund, which uses gasoline taxes to pay for highway repairs. With our national infrastructure in worse shape than the ’62 Mets, that’s a no-brainer, right?

But if you take a few minutes to consider the implications of both of these moves, the picture darkens considerably.

Creating a premium high-speed lane for powerful tech and media companies will push start-ups, entrepreneurs and innovators into the slow lane, crimping the lifeblood that turned the Internet into a once-in-an-epoch phenomenon and transformed nerdy college-dropout dweebs like Bill Gates, Steve Jobs and Sergey Brin (yeah, we know, Gates was nerdier than both of them put together) into titans of industry.

And putting tolls on the wide-open spaces, forcing us to fish out some coin every few miles as we see the U.S.A. in our Chevrolet? That’s just too depressing to think about.

We’ll skip the rant here about the inexorable inequality and concentration of power and wealth that’s permeating every corner of our society these days. Suffice it to say, we’re losing something important here, folks.

There’s got to be a better way. On net neutrality, the best suggestion we’ve heard thus far is from William Baker, former president of WNET, New York’s public broadcasting station. In a letter to The New York Times, Mr. Baker proposes setting aside a chunk of what big Internet companies will pay for their new fast lane and using these funds to subsidize a high-speed lane for public media, nonprofits and start-ups.

We’ve got a few ideas of our own about highway tolls. Perhaps Congress could postpone a few of those $3-billion ships the Navy is building and stop subsidizing the oil industry instead of asking us to separate our quarters from our pocket lint while we’re searching for the next rest stop on I-80. Throw in a micro-tax on computerized hedge-fund trading and a cap-and-trade system on carbon emissions and we can fix every dilapidated road and bridge in the United States.

Memo to President Obama: this is not the change we hoped for.

Is the new $4-billion transportation hub at the World Trade Center a wise investment of public funds?