By Jack Rogers
From the March/April 2014 issue

Gov. Gary Herbert insists he has no national political aspirations, but other governors eyeing the White House might want to take a look at his record before they dive into the 2016 race: it will be very hard to top. 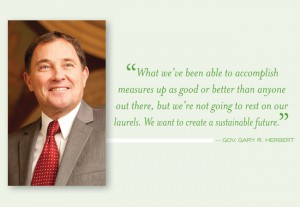 Herbert became Utah’s chief executive in 2009 when Gov. Jon Huntsman was named U.S. Ambassador to China. Taking office in the midst of the Great Recession, with unemployment in Utah peaking at 8.4 percent, Herbert immediately set an aggressive course for growth that defied the national malaise.

“When I came in we set a goal to be the number one performing economy in America and the premier global business destination. That was a pretty bold, audacious goal in 2009 and yet we see that literally being fulfilled,” Herbert told Business Facilities in an exclusive interview.

The results can’t be denied: a 3.9 percent unemployment rate, the second-fastest growing economy in the nation, a highly diverse mix of thriving industry sectors and a well-educated, rapidly expanding population (43 percent of adults have post-secondary level degrees) that enjoys arguably the best quality of life in U.S. Utah, BF’s 2011 State of the Year, has perennially occupied the top tier in our flagship state rankings categories in recent years, including Best Business Climate and Economic Growth Potential.

“What we’ve been able to accomplish in Utah measures up as good or better than anyone out there,” Herbert told BF. “Our diversified economy, an unemployment rate that’s the fourth-lowest in America, the fact that we’ve significantly raised the bar on education, an extremely productive labor force and our business-friendly environment here—this is why so many [global] companies tell us their most-requested worldwide transfer location is Utah.”

Gov. Herbert is proud to point out that just about the only sector that isn’t growing in Utah is the size of its state government. Today, there are fewer state employees than there were in 2001, despite double-digit growth in the Beehive State’s population.

“We’re literally doing more with less in state government and that’s one of the secrets or our success,” Herbert says. “We’ve found ways to be more efficient. We get out of the way of the private sector and let it do what it does best—expand, create more wealth and create more jobs.”

Herbert’s common-sense approach prohibits the state from spending more than it takes in, eliminates what he calls “nonsensical” regulations and eschews tax increases. These fundamentals have been rewarded with a consistent AAA bond rating, one of only a handful of states to maintain that kind of creditworthiness.

But Gov. Herbert has no intention of resting on his laurels. He recently launched the Your Utah, Your Future program to plan and implement a long-term, “market-driven” strategic vision for sustainable economic growth that will keep Utah thriving while its population grows by a projected 750,000 over the next 20 years.

“We know we better plan for (our growth), anticipate it and accommodate it,” Herbert explains. “We want to create a sustainable future that maintains, if not improves, our quality of life and provides economic opportunities for our kids and grandkids and those who come after them.”

Like many other initiatives the governor has put forward during his tenure in office, Herbert firmly believes the key to success for Your Utah, Your Future is a “bottom-up” approach instead of top-down management, with input from the public, the private sector and Utah’s cities and counties.

“We’re saying we’ll have this growth and we want to know what you want it to look like over the next 20-25 years.” he adds.

With large swaths of Utah classified as both mild and heavy desert (as well as the famous salt flats) and recent experience dealing with droughts, an important focus of the strategic planning effort will be devoted to ensuring that a state with one of the fastest-growing populations in the U.S. has ample water resources.

Gov. Herbert told us he has a two-pronged strategy for expanding Utah’s water supply: an aggressive water conservation program as well as development of more water resources. His “Slow the Flow, Save H20” program aims to reduce Utah’s water consumption by 25 percent over the next 20 years. Several projects are in the works to expand water resources, including the Lake Powell Pipeline, which will enable Utah to claim its full share of Colorado River water (per the 1922 Colorado Compact) and pump the river water out to areas in southern Utah. Herbert plans to complete the Central Utah Water Project (an effort begun by his predecessors), which will maximize the supply drawn from snow melt, rivers, canals and reservoirs. Utah also is busy developing drought-resistant grasses.

“I met with President Obama last month and we talked about the need to have the capacity in place to store our water in years of plenty so we can release it in years when we have more drought-like conditions,” Herbert told BF.

Speaking of snow melt, Gov. Herbert says Utah’s resort industry is aggressively diversifying to face the challenge of whatever Mother Nature serves up in coming years. “Our 14 major resorts are investing more than $1 billion to expand operations for spring, summer and fall activities, including building more golf courses and trails for hiking, fishing and camping,” he says.

The Salt Lake City area is a leading hub for advanced aerospace manufacturing and composites fabrication. Boeing, which has a fabrication and assembly operation in Salt Lake City, is in the midst of refurbishing an 870,000-square-foot facility in nearby West Jordan where it will build composite horizontal stabilizer components for its 787 Dreamliner. Earlier this year, the Chicago-based aircraft giant came close to moving its primary 787 assembly facility from the Seattle area to Salt Lake City [a last-minute union deal kept the plant in WA].

“Boeing explored 54 locations across the country [for the 787 assembly], but the first phone call they made was to my office in Salt Lake City,” Gov. Herbert told us.

The focus on advanced materials for aerospace/defense applications has drawn carbon-fiber leader Hexcel and ATK (which fabricates stringers and frames for the fuselage of the Airbus A350 XWB at its Clearfield, UT facility) as well as Boeing to put down roots in Utah. Fabrication of outdoor products and sporting goods from composites also is an emerging growth sector in the state.

Easton, which makes hundreds of outdoor products and sports equipment including baseball bats, produced all of the arrows used in the Olympics at its Salt Lake City facility. Another major composite arrow maker, Hoyt Archery, also has a plant in Utah.

Utah’s IT, data center and software cluster continues to grow exponentially and includes industry titans Adobe, eBay, Twitter, Oracle, C7, IM Flash and Microsoft. The strength of this cluster was a key factor in the NSA’s decision to put its new $1.5-billion National Cybersecurity Data Center at Camp Williams. “Utah’s Silicon Slopes are now recognized as being completely competitive with Silicon Valley, only with better skiing,” Gov. Herbert says.

The Beehive State is a national leader in the hot growth sector of digital media, drawing key players including Disney Interactive and EA to Utah. Higher education resources played a key role in the workforce development for the digital media industry in Utah: a Cluster Acceleration Partnership for digital media was spearheaded by Utah Valley University and supported by the nationally recognized animation department at Brigham Young University.

According to Gov. Herbert, the state’s emphasis on education is the key to growth in every targeted sector in Utah.

“This is so critical for our state we set a goal to have 66 percent of the adult population with a post-secondary degree or certificate by 2020,” he told BF. “We’ve doubled the number of graduates in engineering and in digital media over the past five years. This year alone we’ve provided $20 million in funding for STEM (science, technology, engineering and mathematics) education.”

More than 70 percent of Utah is federal land: nearly 37 million acres out of a statewide total of 54 million is
federally owned or managed. The Utah director of the federal Bureau of Land Management actually controls more land in the Beehive State than the governor. Gov. Herbert has had an ongoing dialogue with the U.S. Interior Department aimed at opening up tracts of federal land for development.

A focus of his effort has been to expedite the federal permitting process for energy development on public land. “Time is money for private investors who want to develop the energy, and if the permitting process is too long, they’ll go to places like North Dakota where it’s all private land,” Herbert says.

The dialogue appears to working: in the past two years, Utah has gained federal approval for 5,000 permits to facilitate new oil and gas wells in the Uintah Basin in the northeastern part of the state near the Colorado border. The permits have produced a boom of industrial-scale development in the region, which is rich in paraffinic “Black Wax” oil.