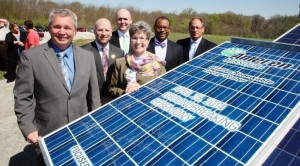 “The solar energy center we are starting to build in O’Fallon today represents the kind of cleaner energy resource many of our customers have asked us to build to provide them with energy, and we are proud to be taking this historic step to do just that,” said Michael Moehn, chairman, president and CEO of Ameren Missouri. “We are working to diversify our mix of generation sources and transition to cleaner and renewable energy sources. Building this solar facility is a critical part of this goal.”

The plan calls for 19,000 solar panels spanning an area approximately the size of 19 football fields. The solar facility is scheduled to begin delivering electricity to customers by the end of 2014.

The solar energy center is the latest milestone in a history of renewable energy investment that reaches back more than 100 years. In 1913, the company’s first hydroelectric energy center opened. In 2012, the company opened the Maryland Heights Renewable Energy Center, one of the largest plants in the nation turning landfill gas into energy, or “methane to megawatts.”

“Since 2009, Missouri has made great strides in renewable energy production, due in large part to Governor Nixon’s commitment to clean, affordable and abundant energy,” saidLlona Weiss, Deputy Director for Administration in the Missouri Department of Economic Development’s Division of Energy.  “It is projects like this that help make our state the premier location for renewable energy generation and manufacturing.”

“This is an exciting new chapter in Missouri’s energy history,” Moehn said. “The O’Fallon Renewable Energy Center is the first of several solar facilities Ameren Missouri plans to build in years to come. We’re helping to drive the economy and create jobs in addition to serving our customers’ needs into the future.”