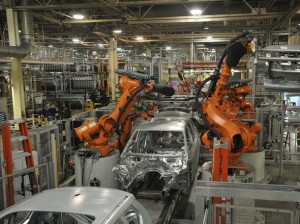 Germany’s Big Three automotive powerhouses, locked in a no-holds-barred battle for the lucrative North American market, are poised to unleash billions of dollars to expand production on this side of the Atlantic.

BMW fired the biggest salvo thus far this year in the battle for North American automotive hegemony with its March 28 announcement of a $1-billion expansion at its Greer, SC plant.

The luxury car leader plans to increase the production capacity of its Spartanburg County facility by 50 percent, upping its annual output to 450,000 vehicles by 2016 and adding a new large SUV called the X-7. The expansion will make the South Carolina plant BMW’s largest worldwide auto facility, overtaking its original production hub near Munich, which produced 342,000 cars last year.

According to a Bloomberg News report, BMW also is on the verge of a decision to build a second North American plant. At least two sites in Mexico are candidates for the facility, which may produce BMW’s bestselling 3-Series vehicles.

The Chattanooga plant was the focus of an organizing effort by the United Auto Workers that culminated in a 712-626 vote by plant workers in February to reject UAW representation. State officials broadly hinted before the vote that if the union was rejected VW would commit to expanding production at the Tennessee plant.

Mercedes is adding production of C-Class sedans in June at its Tuscaloosa, AL plant. According to the Bloomberg News report, Mercedes also is mulling building a new plant in North America to add capacity as the luxury carmaker rolls out up to 30 new models by the end of the decade.

Bringing production closer to the burgeoning North American automotive market is not the only reason the German giants are expanding their output on this side of the pond. Industry analysts say reducing the impact on revenue from swings in the dollar-euro exchange rate also is a driver in recent site selection decisions by Germany’s Big Three.