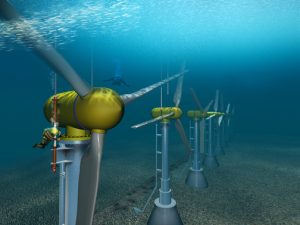 In the March/April issue of Business Facilities, we give you a grand tour of the Energy Revolution that’s sweeping across the U.S., powering growth by tapping vast deposits  of energy deep underground and hooking up electricity from wind, solar, hydro and geothermal renewables to new transmission lines that carry it to energy-hungry markets.

There were so many tangible new energy developments to report, we didn’t have the space to speculate in print on breakthroughs that may be just over the horizon–or in this case, under it. Several locations on the East Coast have pilot projects in the works to tap into a renewable energy source so easy to find you can locate it just by sittin’ on the dock of the bay.

Hydrokinetic power–drawing energy from tidal flows–may be the next frontier in alternative energy.

In future years, New York could see a significant increase in hydrokinetic power from coastline installations if wave conversion or tidal in-stream power technologies prove technically and economically feasible. New tidal kinetic hydropower technology installed in New York City’s East River recently was connected to the electric grid, and a proposal now under development would test the feasibility of hydrokinetic generation in the Niagara River. There’s also a pilot tidal power project off the coast of Maine.

NY’s Roosevelt Island Tidal Energy Project holds the world’s first commercial license for tidal power from its grid-connected array of turbines in New York City’s East River. The project, led by Verdant Power, Inc., has completed an installation of 30 turbines that will use the flow of the river and tides to generate 1,050 KW of electricity. This power will be delivered to 9,500 New York homes.

The U.S. Department of Energy funds research to companies that are developing innovative water technologies and began providing Verdant Power with funding in 2008 to improve the turbines’ blade design.

Verdant had been successfully developing and testing turbine prototypes in the East River since 2002, but those turbine rotors were not durable enough to be scaled up for commercialization. With the DOE’s assistance, Verdant designed and tested new blades, which are stronger and more reliable–allowing them to capture more energy from faster currents at greater depths and at a lower cost.

Unlike conventional hydropower facilities, which require either a dam or a stream elevation drop to produce energy, newer in-stream or hydrokinetic systems place turbines below the surface of moving water–in tidal flows, rivers, canals and even wastewater treatment plants.

With more than 120 miles of Atlantic Ocean coastline, New York could benefit significantly from wave energy conversion and tidal in-stream energy conversion. According to the NY Department of Environmental Conservation, it’s estimated that converting less than one-tenth of one percent of the renewable energy within the oceans into electricity could satisfy today’s world demand more than five times over.

Since it’s becoming increasingly apparent that our century-long addiction to fossil fuels is going to result in a much larger oceans (probably with much bigger waves), it’s nice to know that someone is trying hard to make that work to the benefit of humankind. 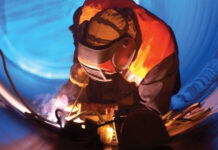