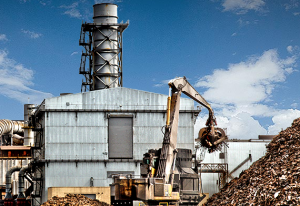 Gov. Bobby Jindal and Nucor Corp. Chairman, President and CEO John Ferriola have dedicated the company’s completed direct reduced iron – or DRI – plant in St. James Parish. The $750 million plant is the first of a potential five-phase project in the parish, which is located on the Mississippi River approximately 60 miles north of New Orleans.

Nucor has created 140 new direct jobs to date and will reach its target of 150 jobs well in advance of the company’s year-end 2014 commitment to the State of Louisiana. By the end of 2015, the company will inform Louisiana officials of its intent to complete the remaining four phases. Should all five phases be developed, Nucor’s total investment would reach $3.4 billion and total direct employment would reach 1,250. More than 500 construction jobs were created during the first phase, and LED estimates all five phases would result in 4,800 new indirect jobs, for a total of more than 6,000 new jobs.

At the opening, Gov. Jindal said, “Nucor has built a successful first phase in this ambitious, world-scale project and is producing direct reduced iron for its mills at a higher level of efficiency than anyone has ever achieved. Nucor’s investment in Louisiana is one of the reasons we have more people working and living with higher incomes than ever in our state.”

The Convent plant receives imported ferrous oxide from Brazil, Canada and Norway, conveying the iron ore from a Mississippi River terminal to the direct reduced iron plant. There, the material reacts with natural gas at extremely high heat, the oxygen is removed from the ore, and refined iron pellets are conveyed back to river barges that ship the product to Nucor’s steel mills across the Southeast U.S.

“Our DRI plant represents a major milestone for our company and for American manufacturing,” Ferriola said. “This project is a key part of our strategy to produce more of our own raw materials in order to control costs better and maintain our competitive advantage in the global steel industry. This is the largest DRI plant currently operating in the world and the first one to operate in the U.S. since 2009. We are very proud to be investing in American manufacturing and to add Louisiana to the list of states where Nucor does business.”

“I would like to congratulate all 140 Nucor Steel Louisiana teammates for the safe, hard work they put in to get our DRI plant up and running,” said General Manager Les Hart, who oversees the Nucor Steel Louisiana site. “They have done a tremendous job, and we are very pleased with the results we have seen so far. We are proud to call St. James Parish home, and we look forward to being an active community participant for years to come.”

In March 2011, Gov. Jindal and Ferriola’s predecessor at Nucor, Dan DiMicco, broke ground on the project after the site selection and permitting process was completed. Nucor had announced in September 2010 its selection of St. James Parish for one of the largest industrial projects in Louisiana history.

To secure the project, LED offered a customized incentive package to Nucor, including performance-based financial assistance that totals $160 million over approximately six years, provided that all five phases are initiated as scheduled in the company’s agreement with the State of Louisiana. Nucor also is utilizing a federal Gulf Opportunity Zone bond allocation of $600 million, which the company alone will be responsible for repaying, and Nucor will utilize the state’s Quality Jobs Program.

“The completion of Nucor’s Phase I is truly a sign of the resiliency and vitality of our business climate,” said Executive Director Chassity McComack of the River Region Chamber of Commerce. “Being nestled between New Orleans and Baton Rouge, this growth provides a huge advantage for our area and creates a multitude of unlimited opportunities for local success and workforce development. We are proud to have Nucor as a member of the River Region Chamber of Commerce and will be additive and supportive to their growing needs in the years to come.”