By Jonathan Sanders
From the January/February 2014 issue

A two-and-a-half-year journey to rebuild schools destroyed by the EF-5 tornado that tore through Joplin and Duquesne, MO on May 22, 2011 reached an important milestone on Jan. 6, 2014 with the opening of three new schools: Irving Elementary, Soaring Heights Elementary and East Middle School. The new schools will be home to more than 1,300 students who have been attending classes at temporary facilities since the disaster.

The EF-5 tornado that devastated Joplin and Duquesne in the spring of 2011 damaged or destroyed 10 of 20 district buildings and resulted in financial damages of more than $100 million. Today, Joplin schools remain firmly on track to returning all displaced students and staff to permanent schools by August 2014.

On January 22, representatives from businesses, utilities, nonprofit, and city and county government attended a meeting of the Mid-Missouri Regional Planning Commission to get an update on the tornado recovery efforts. Rob O’Brian, president of the Joplin Area Chamber of Commerce, shared lessons learned from the response and recovery experience. The EF-5 tornado destroyed or substantially damaged 531 employers in the city and put more than 5,200 jobs at risk.

O’Brian discussed the innovative approach taken towards recovery. A new model for working together was championed by the Joplin Area Chamber whereby the Small Business Administration (SBA) and the Small Business & Technology Development Center (SBTDC) of Missouri Southern State University shared space with the Chamber in their offices in order to have a “one-stop” Business Recovery Center. This resulted in the quickest opening of a Business Recovery Center for any disaster. Due to the great success of this approach, the SBA has changed their response approach in post-Joplin disasters.

How successful was the business recovery effort in Joplin? At this point, 88 percent of the employers affected by the tornado have reopened and over 95 percent of the jobs have been retained. But the good news does not stop there. Over 150 new companies have opened in the city, adding 500 full-time and 350 part-time positions. Employment in Joplin is now at pre-recession levels.

A NEW VISION FOR SCHOOLS

Shortly after the disaster, administrators, staff, students and the community came together to create the vision for the schools that would be rebuilt or replaced in Joplin. That vision included schools designed around learning (schools with flexible spaces, group areas, quiet areas for individual study and even outdoor classrooms). It also focused on increased safety. Community safe rooms built to withstand winds of 250 miles per hour are under construction throughout the district. These FEMA safe rooms will serve students, staff, and the surrounding community during severe weather.

The spaces may be new, but they will seem familiar to the students, teachers, parents, and school administrators who came together to provide the architects with a vision for the schools. The result of that collaboration: dynamic 21st century learning environments filled with colorful, flexible spaces designed to promote learning.

The new Irving Elementary will house both Irving and Emerson students. It was constructed on property donated by Mercy Joplin—the same property where St. John’s Hospital was located until it was destroyed by the tornado. Plans for the Emerson property will be developed by the school district as the community rebuilds and residents return to the neighborhoods that were in the path of the storm.

The new Soaring Heights Elementary also replaces one of the destroyed elementary schools and will serve students from Duquesne and Duenweg, MO. Duquesne and Duenweg students were combined into one school after the disaster to provide a temporary space for former Emerson students whose school was destroyed. Soaring Heights Elementary is connected to East Middle School. The two buildings share an auditorium and kitchen but have separate entrances for students, staff, and parents.

East Middle School was also among the destroyed schools. East was only two years old at the time of the disaster. A renovated warehouse space in Joplin’s industrial park has served as a temporary location for East Middle School students since the tornado.

Each school possesses its own unique features to provide students the best opportunities to learn, collaborate, and explore. They also share many similar characteristics, including these elements that integrate new technology:

Special care was taken to ensure that the new or restored schools preserved the history of the buildings they replaced in Joplin. Commemorative components in the new schools honor the past, including the relocation of the cornerstone from the old Irving to the new school, the relocation of the bell from Duquesne to Soaring Heights, and the large wall graphics at Irving, East, and Soaring Heights depicting images of previous facilities.  Each new school features a time capsule that will preserve mementos relevant to the 2013-2014 school year.

The Joplin school system also used the rebuilding process as an opportunity to incorporate improvements that bring the new buildings in line with the latest innovations aimed at environmental health, including:

A CENTRAL LOCATION FOR BUSINESS

The Joplin Metro area in southwest Missouri is in the center of North American markets. Major metros such as Dallas, Kansas City, St. Louis, Tulsa, Little Rock and Memphis are just hours away. Transportation to those markets is efficient, thanks to Interstate highways and substantial rail connections. Commercial air service is available at Joplin Regional Airport and three other major airports within 90 minutes drive time.

Companies in the Joplin Metro area benefit from a productive, available labor pool of more than 93,000 people. Missouri Southern State University in Joplin offers a strong industrial technology program. Crowder College is a source for customized technical training. Joplin’s quality of living is enhanced with two major regional medical centers, more than 150 restaurants and a wide variety of retail from locally owned shops to the 114-store Northpark Mall. 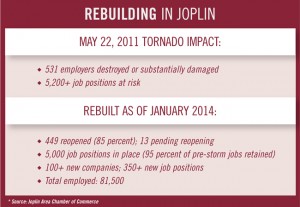 With Wal-Mart’s headquarters in nearby Bentonville, AR (just 45 miles away), Joplin is well positioned geographically to serve as a distribution center for suppliers who have a directive to provide just-in-time deliveries. Joplin is located within two hours of six of Wal-Mart centers, which gives the region a logistics advantage for supplying the Wal-Mart system.

The Joplin Metro area’s position for serving national markets is nearly as advantageous as Chicago or Kansas City. Interstates 44 (east-west) and 49 (north-south) connect to every region in the country. Four airports within 110 miles serve the region, providing commercial and cargo service to markets throughout the world. Two Class 1 and one local railroad are important parts of the transportation system.

The Joplin area already has several back-office operations. Companies such as La-Z-Boy, General Mills and Owens-Corning transport their finished products from the area.