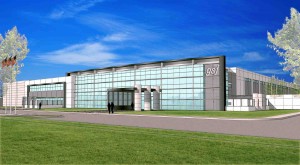 Jeffrey A. Raday, P.E., president of McShane Construction Company, is pleased to announce that construction is underway for the new regional headquarters and logistics center for Golden State Foods. The new facility is being constructed in McCook, IL, a well-positioned transportation corridor within the near west suburbs of Chicago. Golden State Foods will relocate from its current operations in Lemont and Bolingbrook, IL into this modern, expanded space following completion of the facility in May 2014.

Golden State Foods is one of the largest diversified suppliers to the quick service restaurant (QSR) industry. Established in 1947, the company has approximately 4,500 employees worldwide and services more than 25,000 stores on six continents from its 37 facilities. Its core businesses include processing of liquid products, meat, produce, dairy and other services as well as full-line distribution to the quick service restaurant industry. GSF customers include McDonald’s, Chick-fil-A, Starbucks, Nestle, Arby’s, Zaxby’s and Taco Bell.

The contemporary facility will feature a two-story office component and warehouse/distribution space with a cross-dock configuration. The construction will incorporate 52 truck docks, 54,000 square feet of dry storage space and a separate on-site maintenance building. The facility is being constructed to meet LEED-Gold Certification standards.