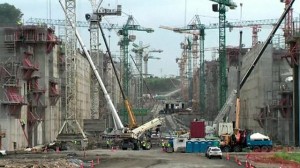 When the project to double the size of the Panama Canal was initiated in 2007, everyone involved agreed that the most appropriate completion date for this mammoth undertaking would be 2014—just in time for the 100th anniversary of the opening of the world’s most important shipping channel.

Well, it’s beginning to look like we won’t need to take our Teddy Roosevelt costume out of mothballs until at least the end of next year, and possibly not before 2016.

Late last year, the consortium leading the Canal expansion conceded the work was nine months behind schedule; they pushed back the re-opening until 2015. This month comes word that the original cost estimate for the project, $5.3 billion, was about $1.6 billion less than what it will actually cost to complete it. Talks between the Canal Administrator and the Spanish-led construction consortium over who will foot the bill for the cost overruns broke down a few days ago and work on the project reportedly has halted.

Quijano apparently believes he can get Sacyr to back down by turning its consortium partners against it or, as a last resort, assigning the remaining work on the Canal project to new bidders. In his news conference, he indicated that an earlier decision to designate the Italian consortium member Salini Impregilo as lead builder in the project had “complicated” negotiations with Sacyr. [Belgian and Panamanian construction firms also are working on the project].

Quijano warned the window for a deal is closing “minute-by-minute,” which for some reason gives us the image of a huge Canal lock gliding into place and suddenly jamming. President Ricardo Martinelli of Panama is assuring everyone his nation has the resources to step in and finish the project if all else fails.

Industry experts who warned in 2009 that the consortium won the project by submitting an unrealistically low bid are loudly saying “I told you so.” Based on current estimates, Group United for the Canal’s original $3.1-billion bid will amount to only about 40 percent of the actual cost of the project. The consortium undercut a competing bid from the American conglomerate Bechtel by more than $1 billion.

The stakes in this dispute are enormous, particularly for the United States and its Asian trading partners. East and Gulf Coast ports in the U.S. have spent billions to be ready to receive the huge Post-Panamax container vessels that will be able to make the direct trip from Asia once the expanded Canal is ready. Conversely, U.S. producers of liquefied natural gas (LNG) are gearing up to ship directly from the Gulf Coast to Asian markets. The overall global economic impact of an expanded Panama Canal is measured in trillions of dollars.

The 50-mile-long Canal through the Isthmus of Panama currently carries up to 6 percent of world commerce, a figure that is expected to double when the expansion is complete.

For years, supersized Post-Panamax ships from Asia have had no choice but to dock on the West Coast, sending cargo to U.S. markets via train or truck. The Panama Canal expansion project is expected to alter global trade routes. As older, smaller ships come offline, they are being replaced with the super Post-Panamax cargo ships, some of which are three-and-a-half football fields wide. These ships can carry over twice the amount of cargo (12,500 TEUs or 20-foot containers) compared to the Panamax ships that hold no more than 5,000 TEU.

As a result, Gulf and East Coast ports are vying to attract the bigger ships and all of the economic benefits that come with them. However, the ports have to be post-Panamax ready (PPR). This means ports must have both a 50-foot channel depth with sufficient channel width and turning basin size, cranes capable of loading and unloading Post Panamax ships, and terminal docks engineered to handle the new, bigger cranes required for such vessels.

As of last fall, the Port of Baltimore and Port of Virginia (in Norfolk) were the only East Coast ports that could accommodate the large ships. But nearly a dozen other U.S. ports are expected to join them in the coming months on the list of those ready for the Post-Panamax era to begin.

Let’s hope they don’t have to wait too long to greet the mega-ships. 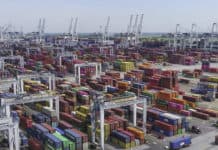 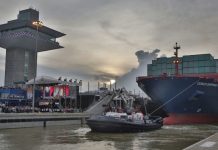 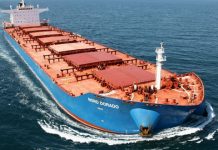