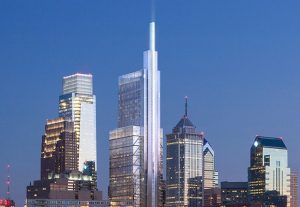 Gov. Tom Corbett joined Comcast Chairman and CEO Brian Roberts and Liberty Property Trust Chairman and CEO Bill Hankowsky for an historic announcement that will drive economic progress and transform Philadelphia’s skyline with the construction of a $1.2 billion, 59-story tower that will become the dedicated home for the company’s growing workforce of technologists, engineers and software architects.

“The transformative investment Comcast has chosen to make with this project will have a strong impact throughout the region,” said Corbett. “The commonwealth’s partnership with Comcast will create more than 20,000 direct and indirect jobs during construction, at least 1,500 new Comcast positions, and energize Philadelphia’s Center City. I believe that it is our people – their creativity, ingenuity, talents and skills – who drive companies like Comcast to make Pennsylvania home.”

Comcast Corporation and Liberty Property Trust announced they will develop the ‘Comcast Innovation and Technology Center’ in Center City Philadelphia. The mixed-use tower is expected to be the one of the tallest buildings on the East Coast.

“We are thrilled to mark another historic moment in our company’s history in Pennsylvania with the development of the Comcast Innovation and Technology Center,” said Brian L. Roberts, Chairman and CEO of Comcast Corporation. “This expansion of Comcast’s vertical campus in Philadelphia will create tens of thousands of jobs and drive billions of dollars in economic development in the Commonwealth and the City. This exciting project would not be possible without the support of the Commonwealth and Gov. Corbett, who is a true and committed partner in driving Pennsylvania’s growth.”

Designed by world-renowned architect Lord Norman Foster of Foster + Partners, the glass and stainless steel tower will complement Comcast Center as a new energetic dimension to Center City. The project will include a Four Seasons hotel and a block-long lobby with a glass-enclosed public indoor plaza accompaniment to Comcast Center’s existing, dynamic outdoor plaza. The lobby will feature a restaurant and a new concourse that will provide direct connections with SEPTA’s Suburban Station, enhancing accessibility and providing new options for commuters.

“This entertainment and innovation complex elevates downtown Philadelphia’s strong reputation as a world-class destination for culture and connection,” Corbett said. “We’re investing in public spaces where visitors and Pennsylvanians alike can marvel at our world-class art, our incomparable architecture and our unique attractions. This project is not only about building a new tower on Philadelphia’s skyline, or about creating new and beautiful public spaces in Center City. This project shows that Philadelphia is taking a bite out of the ‘Big Apple’ and we are ready to compete with anyone in the world to bring jobs to Pennsylvania.”

The commonwealth has committed to providing up to $30 million in grants to be disbursed over multiple years and $4.5 million in job creation tax credits to support the $1.2 billion project. According to an econometric study by Econsult, the Commonwealth’s grants will be more than repaid with the more than $80 million in tax revenues just during the construction phase giving taxpayers a 200 percent return on investment.

The grants must be directed to costs associated to the public improvement aspects of the project. This includes the plaza area, and upgrades and direct connection to Suburban Station, and the widening of sidewalks and roads which will improve access to the area for all Philadelphians.