Home » Industry News » Aerospace & Defense » We ARE the Government 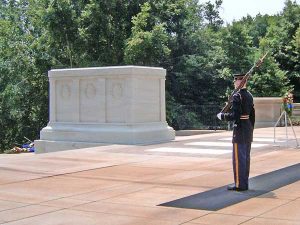 The National Park Service has suspended the tram service at Arlington National Cemetery due to the government shutdown.

This means disabled veterans do not have an easy way to get to the gravesites of their fallen comrades who are enshrined for eternity on the 624 acres of hallowed ground at Arlington.

But if they’d like to stop by the Bureau of Printing and Engraving, where the money we’re running out of is inked and trimmed, it’s business as usual. They also can check out the headquarters of the Federal Reserve Board, still up and running, if they’d like to take a peek at Ben Bernanke as he sips his latte and contemplates the global Depression that will likely follow a default on our national debt, now scheduled by Congress to take place on Oct. 17.

The soldiers buried at Arlington laid down their lives to stop the menace of fascism and other virulent strains of totalitarianism from achieving the sordid goal of making government of the people, by the people and for the people perish from the Earth. They defended America and made sure our democracy always has been secure from external threats.

But today you can’t take the tram to visit their final resting place and thank them, because a clique of sleazy politicians has turned its back on democracy.

The charlatans who crawl around the corridors of power in the U.S. Capitol, their campaign funds (and maybe some of their pockets) bulging with largesse bestowed by shadowy interests who buy their votes, have decided to hold the entire nation hostage to their bogus and shape-shifting demands. These characters think America’s citizens are bit players in the surreal cabaret known as the House of Representatives. Perhaps tomorrow they’ll threaten to burn the Capitol Building while they shut off tours of the house where Lincoln died.

But these dangerous clowns have overlooked an important detail. It’s still there, buried in the high school civics textbook we left jammed into the bottom of our lockers, under the smelly gym shoes and a couple of brown-bag lunches we didn’t have time to eat:

Folks, it’s time for us to govern. We can take the dynamite away from the characters who, as this is being written, seem determined to blow up the foundation of our democracy and derail our still-sputtering economy. We can sweep them into the Potomac River and watch them get washed out to sea. We can recall, expunge, impeach, remove, banish and condemn them. We are the government.

In an age of instant communications, all it will take is one online petition demanding that these jokers stand before us in an election–not in November 2014, but right now, before the damage they do becomes irreversible. Eighty million signatures later–our bet says they’ll be posted within 48 hours–and we’ll have our reckoning.

It’s time to throw the bums out. It’s time to govern. It’s time to honor the heroes who rest at Arlington, who gave their lives so we always could govern this land we love, this place we call America.