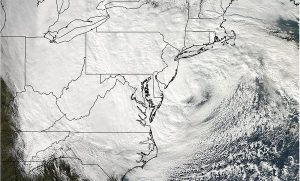 One year ago on this date, a storm named Sandy made a sharp left turn off the coast of New Jersey and moved ashore a few miles north of Atlantic City. Had Sandy been a typical late-October hurricane, the damage likely would have been limited to localized beach erosion, a swath of downed trees in the Pine Barrens and some short-lived power outages.

But there was nothing typical about this storm. As it approached the coast of NJ, the hurricane collided with two storm fronts–one rolling in from the Midwest and the other coming down from Canada. This rare meteorological confluence gave birth to Superstorm Sandy, a monster spanning an astonishing 1.8 million square miles.

Sandy’s wrath touched parts of 24 states (from Florida to Maine and as far west as Ohio), but she unleashed the brunt of her fury on New Jersey, New York City and the western half of Long Island. The storm sent a 30-foot-high wall of water directly into New York’s harbor at high tide under a full moon. This gut punch was accompanied by a roundhouse right from the surging waters of Long Island Sound, which rifled through the Throg’s Neck channel and blasted down the East River. Hurricane-force winds wreaked havoc for hundreds of miles in every direction.

The dawn of the next day revealed the catastrophic consequences. Towns along the 150-mile-long Jersey Shore were decimated, with houses, businesses and boardwalks rendered to splinters; the iconic Seaside roller coaster was swept into the ocean. More than 350 houses in Breezy Point, NY were lost to an out-of-control fire, but thanks to FDNY heroes–who dived under storm-driven flood waters to connect hoses to fire hydrants–lives were spared. Not so in low-lying areas of Staten Island, where numerous victims were found drowned in their attics, trapped by the rapidly rising water.

Nearly half of New Jersey’s nine million residents were without power, huddled in frigid homes without light or heat in the late October frost, with nowhere to go until gasoline deliveries resumed and generators could be hooked up to gas station pumps. In NY, the only train line connecting the Rockaways with the rest of Queens was destroyed while a newly formed inlet between the Atlantic and the Sound isolated residents on the western tip of Long Island.

At least 117 fatalities were attributed to Sandy in the U.S., as well as an estimated $65 billion in property damage. The recovery began immediately: Gov. Chris Christie seemed to be everywhere, moving through the front lines of the disaster in a monogrammed fleece pullover like a general, deploying battalions of emergency workers and caring for the wounded. The cavalry arrived, led by President Obama, who offered a famous hug and billions in federal aid. The president’s request for $60 billion in disaster funds for NJ and NY was later trimmed to $48 billion by Congress, after an unseemly delay for a few weeks of the rancid dysfunctional partisan politics afflicting Washington.

A year later, we can access the progress–or lack thereof–that has been made in the Sandy recovery.

On the plus side of the ledger, Gov. Christie fulfilled his pledge to have all of the boardwalks on the Jersey Shore open for business by the start of the summer season on Memorial Day. Iconic landmarks like Ellis Island and the New York Aquarium also have reopened.

Unfortunately, homeowners and small businesses have not fared as well as tourists and beachgoers.

While Sandy Recovery aid has been funneled to more than 230,000 people and small businesses to date through FEMA, the Small Business Administration, HUD and the Labor Department, barely one-third ($13.5 billion) of the amount allocated for direct aid has been distributed. FEMA acknowledged this week that only 57 percent of the 155,000 homeowners and renters who applied for aid in New York have had their applications processed by the agency.

Other reports suggested that almost two-thirds of the people who applied for federal disaster aid have not received any and at least 27,000 households in NY and NJ remain displaced. Reuters reports that, as of August, just under a quarter of the $48 billion federal recovery fund had been committed to local governments. A recent report from Rutgers-Newark’s School of Public Affairs and Administration estimated that NJ residents and towns still face more than $28 billion in unmet recovery needs. One logjam appears to be centered on Department of Housing and Urban Development grants of up to $300,000 to individual homeowners facing funding shortages as they rebuild. These grants must be administered and distributed by the states.

There’s also been surprisingly little debate during the Sandy recovery about the wisdom of rebuilding almost every structure destroyed by the storm. A proposal by NY Gov. Andrew Cuomo to set aside $400 million in recovery funds to buy up property in low-lying areas and convert the sites to wetlands was thwarted by a quick public outcry. A year after the storm, a drumbeat from doomsayers that superstorms are “the new normal” appears to have given way to the hope that Sandy was a once-in-500-years anomaly.

Whether you embrace that wishful thinking or not, there’s no denying that a lot of the misery left behind by Sandy continues. Our recovery report card is marked “incomplete” and, as President Obama reminded everyone in an anniversary statement today, failure is not an option.

“We take care of our own. We leave nobody behind,” the president said. “And as long as our fellow Americans continue to travel the long and sometimes difficult road to recovery, their country will stay with them every step of the way.”