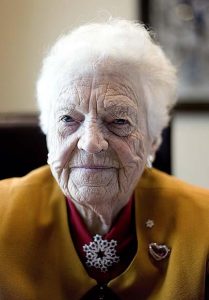 This week, Business Facilities held its traditional after-hours party at the International Economic Development Council’s annual conference. This year’s get-together in Philadelphia, jointly hosted by GIS Planning, took place at the Dueling Pianos bar just a few blocks from the famous statue of William Penn. The place was packed, the beer was flowing and everyone had a great time as the piano players took turns covering pop standards from the ’60s, ’70s and ’80s requested by the crowd. The musicians even created an improvised anthem for the IEDC, sung to the tune of the Village People’s YMCA.

But the golden oldies cranking out of the two pianos probably didn’t seem very old to at least one person in the crowd. Rocking along with the rest of us was Hazel McCallion, who has been the mayor of Mississauga, Ontario for the past 35 years. Hazel is 92 years old.

Known affectionately as “Hurricane Hazel” to the locals up North, Mayor McCallion is still adding to her career of more than three decades as the chief exec of Canada’s sixth-largest city.

Hazel was born in 1921 in a fishing village on the Gaspe Coast of Quebec. Her father owned a fishing company. Because her town was too small to have a high school, Hazel was educated in Quebec City and then Montreal. She became an office manager at Canadian Kellogg, an engineering firm based in Montreal. In 1942, Hazel opened a satellite office for the firm in Toronto. In 19 years with the company, Hazel administered numerous large-scale engineering projects, including generating stations and refineries.

After she married Sam McCallion in 1951, Hazel and her husband put down roots in Streetsville, Ontario. She took an interest in local issues and in 1964 gained an appointment to the Streetsville Planning Board. At the same time, she and her husband launched a local newspaper called the Mississauga Booster (still published by their son). Hazel soon decided her true calling was in the public sector. She resigned from her job at Kellog and in 1970 was elected mayor of Streetsville.

A few years later, Hazel had the only setback in her long political career, when Streetsville was merged with several other towns to create Mississauga, a city of more than 200,000. Her mayor’s post was dissolved as a result of the consolidation. Undaunted, Hazel defeated a popular incumbent in 1978 and became the mayor of Mississauga.

Within a year after becoming mayor, Hazel faced a crisis that would have tested even the most experienced of big city leaders. In November 1979, a train derailment resulted in a massive propane explosion followed by a huge release of toxic chemicals. A poisonous cloud of chlorine gas was heading into the heart of Mississauga. Hazel ordered the evacuation of her city and exhibited leadership that today is the stuff of legend: more than 218,000 people–and the staff and patients occupying three regional hospitals–were moved out of Mississauga in less than 24 hours, with no fatalities or major injuries. Hazel did all of this while limping around with her foot in a cast from a previous ankle injury.

After the heroic effort during the train derailment crisis, Hazel was untouchable, politically. She was re-elected 12 times (the last time in 2010); in several of these elections, they couldn’t find anyone willing to oppose the woman who is arguably the most popular politician in Canada. In 2005, Hazel was awarded the Order of Canada. To this day, she refuses to accept political donations, asking supporters to make a donation to charity.

At the age of 82, Hazel was hit by a truck at a busy intersection in Mississauga. Hazel conducted the city’s business from her hospital bed for a few days, and then. according to newspaper reports, said this when she returned to her desk at the mayor’s office: “The pickup truck is still being repaired.”

Hazel’s popularity isn’t generated strictly by her inspiring character and example. As mayor, she’s built an impressive record of fiscal stability, yielding close to $1 billion in cash reserves in recent years. She also found the time in 2006 to talk a man threatening suicide off a building ledge during a standoff with police that lasted five hours.

Business Facilities was honored to have North America’s longest-serving mayor join us at our IEDC party. We salute Hazel McCallion’s incredible career in public service, and her stamina and fortitude. We’ll be very pleased–and we won’t be surprised–to see her again at IEDC next year.