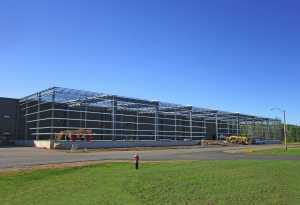 “We’re as busy as we’ve ever been,” said Linetec’s President Rick Marshall. “This is the sixth building expansion in the past 10 years. We continue to grow and serve our customers with the quality and reliability that they’ve come to expect.”

He continued, “Supporting our growth in capacity, we’re growing our staff, too. Not only are we filling the additional jobs due to our anodize expansion, but we’re also bringing on more people to meet the all-around increased demand for our finishing services.”

Construction of Linetec’s anodize facility addition began in August and will be completed by the end of October. “We plan to be up and running before November. Along with extra capacity, the extra space gives us the opportunity to increase efficiency by streamlining our process, improving the workflow and enhancing productivity,” noted Andy Joswiak, Linetec’s vice president of operations.

Jon Close, Linetec’s vice president of sales, added, “We also are increasing our warehousing capacity to provide more room for our Linetec Managed Inventory program. This further benefits our customers by keeping their material on hand and providing just-in-time finishing; whatever they need, whenever they need it.”

In addition to expanding its capacity, Linetec also expanded its geographic reach. Earlier this year, it added more service and distribution routes, including its first regular route to Toronto, Canada.