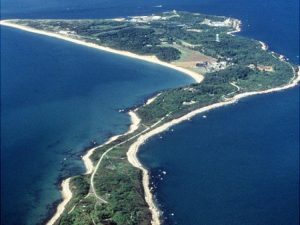 In the paranoid days of the 1950s during the long twilight struggle of the Cold War, the U.S. government fenced off some bucolic stretches of rural America and converted these parcels into factories to produce a full menu of weapons of mass destruction.

Hanford, WA was chosen to host the nuclear reactors that churned out the raw materials for America’s arsenal of atomic bombs, which at its peak included more than 30,000 warheads. Los Alamos, NM, where the first A-bomb was tested in 1945, became the nexus of the nuclear weapons supply chain.

Plum Island, an 840-acre flyspeck off the coast of Long Island, was an uninhabited refuge for terns, seals and sea turtles when the U.S. Department of Agriculture designated it in 1954 as the new home of something called the Animal Disease Center.

What could be more benign than an Animal Disease Center, right? Well, what really was going on behind the security fences on Plum Island had little to do with agriculture and everything to do with the most hideous kinds of weapons. Plum Island was the nation’s premier lab for the development of germ warfare, a.k.a. bioterror.

For the next two decades, the top-secret facility on Plum Island was busy turning microscopic anthrax spores and other lethal organisms into weaponized sprays that could decimate enemy armies and anyone who happened to be downwind. It’s been estimated that a couple of grams of refined anthrax tossed onto the rails can contaminate the entire New York City subway system, potentially killing thousands of people who come into contact with it.

Fortunately, the work on bio-weapons at Plum Island came to a halt in 1975, when the international Biological Weapons Convention (BWC) treaty went into effect.

The BWC, which to date has been signed by 180 nations, prohibits the development, production and stockpiling of biological and toxin weapons. It also mandates the destruction of any existing stockpiles of bio-weapons, although there currently is no formal verification regime to monitor compliance. [No global accord has been reached to ban the production of chemical weapons like sarin gas, which last month killed hundreds of people in Syria’s civil war. There is an international ban on the use of chemical weapons in warfare.]

The focus of the work at Plum Island shifted from offense to defense after 1975. Experiments with some of the most dangerous organisms on Earth–including smallpox, which has been eradicated from the general population–reportedly continued on the island until 2008, when the government decided to shutter the facility and build a new national biodefense lab, eventually placed in Manhattan, KS (now expected to be completed in 2020).

So what happens to an aging weapons lab when the government no longer has a use for it?

The General Services Administration and the Department of Homeland Security (current landlord of Plum Island) say they’ve got a deal for you. They’ve produced several federal studies which concluded that Plum Island is the perfect place to build up to 500 private beachfront homes. The GSA and DHS say they’re determined to move ahead with plans to sell Plum Island to developers, noting that the facilities on the island will continue to deteriorate if they remain moth-balled federal sites.

No word yet on whether the U.S. will offer free impermeable plastic bubbles and biohazard suits to potential homebuilders and their customers. Maybe Armani can design a spiffy Gatsby-style Level 5 bio-suit that will be the height of fashion at future beachfront cocktail parties.

A coalition of at least 60 environmental groups is trying to block the sale of Plum Island. Joined by the nearby Long Island town of Southold, they want Plum Island placed under the management of the federal Fish and Wildlife Service and declared a protected nature preserve off-limits to development.

They may find some sympathetic allies among the folks living near the Hanford and Los Alamos weapons facilities and similar sites. The U.S. Department of Energy confirmed this summer that an underground tank holding radioactive waste at Washington’s Hanford Nuclear Reservation may be leaking into the soil. DOE confirmed that workers at the Hanford site–said to be the nation’s most contaminated nuclear site–detected higher radioactive levels under the tank during routine inspections. While state and federal officials have long maintained that leaking tanks at Hanford don’t pose an “immediate” threat to the environment or public health, the largest waterway in the Pacific Northwest–the Columbia River–is within five miles of the nuclear weapons facility. At this point, no one can rule out the possibility that radioactive waste seeping into the soil may eventually encounter ground water and make its way to the river.

Two years ago, following a massive wildfire in New Mexico, crews at the Los Alamos National Lab had to remove tons of contaminated soil from nearby canyons to prevent flash flooding from washing toxins into the Rio Grande. The river is a source of drinking water for Santa Fe, the state capital. The soil in the canyons near Los Alamos, the primary facility for the nation’s nuclear weapons industry, is said to contain materials with trace amounts of radiation and hazardous chemicals such as polychlorinated biphenyls (PCBs) that were dumped there decades ago. Last year, DOE conceded that groundwater near Los Alamos had been contaminated with chromium which also was seeping into a regional aquifer.

The history of a former W.R. Grace plant in Wayne, NJ illustrates that the long-term damage from an abandoned weapons production facility may not be discovered until a once-rural area has grown into a densely populated suburb.

In 1957, the Defense Department gave W.R. Grace a contract to explore the feasibility of replacing uranium in nuclear weapons with thorium, a radioactive element previous used in old hurricane lamps (before anyone realized how dangerous that was, like radium in wrist-watch dials). In 1957, most of Wayne Township was farmland. The company extracted thorium from monazite ore at the Wayne facility until the program was abandoned in 1971. By 1971, Wayne had grown into a suburban community of nearly 60,000 residents.

Since this was before the federal EPA was created, W.R. Grace simply dumped tons of contaminated sand behind the plant when they shut it down. The hot spot wasn’t discovered until 1982, when a routine helicopter flyover measured ground-level radiation to enforce a new state environmental standard. By then, the radioactive material had seeped into a small farm across the street from the old Grace plant and into a local brook, which carried it to a nearby elementary school. After the discovery, the radioactive sand was packed into metal drums, which sat on the site under a tarpaulin for the next 25 years until officials could find an undisclosed out-of-state location that would take them.

Memo to DHS: We’ll take a pass on the new-home buyer’s tour on Plum Island.

Should the federal tax on gasoline be raised to 50 cents/gallon to fund infrastructure?