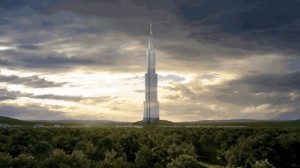 OK, it looks like we’re just going to have to designate August as Eccentric Character Month in the BF Blog.

Earlier this month, we devoted this space to our take on Amazon founder Jeff Bezos’ foray into the mainstream newspaper business. A week later, we were mesmerized by entrepreneurial genius Elon Musk’s vision of 700-mph magnetic-levitation Hyperloop trains in California.

After a brief respite for a doomsday update on climate change, another eccentric now has emerged from the woodwork with a plan to build a business facility unlike any other: there’s a guy in China who says he’s going to put up the world’s tallest skyscraper — at 202 stories (2,740 feet), about twice as high as the Empire State Building — and it’s only going to take him 120 days to complete the project. That’s right, four months, from laying the foundation to topping off the tower. And we have to take this guy seriously because he’s already put up a 30-story hotel in 15 days. He broke ground in Changsha on the mega-project, dubbed Sky City, on July 20 (which also was the date Apollo 11 landed on the Moon).

Two years ago, Zhang Yue was an obscure businessman in China’s Hunan province. As founder and chairman of an enterprise known as Broad Sustainable Building, he specialized in manufacturing industrial air-conditioning units. What’s eccentric about that? Well, we don’t know too many HVAC contractors who have a 130-foot replica of an Egyptian pyramid in their parking lot.

Mr. Zhang decided in 2011 to invent a new method of building skyscrapers, a technique that is modular to the extreme: an entire floor of a new building is fabricated offsite in a factory; the steel framework is embedded in concrete and ventilation shafts, electrical wiring and flooring are installed in the unit before it’s shipped off to the building site. Then the prefabricated unit is quickly slipped into the rising tower and secured into place.

The 2011 construction of Zhang Yue’s first project, a 328-foot-tall building called T30 on the banks of Hunan’s Xiang River, has been commemorated in a memorable time-lapse video that was posted online on New Year’s Day 2012. In the video, construction workers buzz around like gnats as the building rises in seconds while a clock in the corner of the screen marks the time. The building was finished in 360 hours. We’ve stayed in hotels that take more time than that to change the sheets.

Not everyone in the building construction sector is enamored with Mr. Zhang’s ultra-high-speed modular method. Dennis Poon, vice chairman of the Thornton Tomasetti architectural firm and chief structural engineer of some of Asia’s tallest buildings, told The New York Times that Zhang’s design is feasible but has significant drawbacks. Modular structures limit the flexibility of architects to create unique designs, he said, and the 4,450 apartments Zhang is planning to include in Sky City always will be apartments because they won’t be convertible into hotel rooms or office space due to the fixed modular shape.

Mr. Zhang’s instant-skyscraper fever (he’s put up 16 modular structures to date) also appears to be drawing frowns from China’s government, which has belatedly recognized that the world’s most-populous nation has inflated the world’s largest real-estate bubble during the past decade. The powers-that-be in the PRC urgently are trying to cool off the country’s red-hot building sector before the bubble bursts, taking the world’s second-largest economy down with it.

The People’s Daily, house organ for the PRC politburo, criticized the Sky City endeavor (which now is being delayed by a sudden infusion of red tape from Beijing). According to the Times report, People’s Daily noted that the Empire State Building stood nearly empty for two years after it was completed in 1931, earning the nickname “Empty State Building.”

Mr. Zhang probably is getting very anxious about the delays now hitting his dream project, and not just because he likes to finish his work quickly. Over in Saudi Arabia, they’re getting ready to break ground on something called the Kingdom Tower, a skyscraper in Jeddah that’s supposed to top out 532 feet taller than Sky City, taking it a full kilometer into the stratosphere and wresting the world’s tallest building crown from all other contenders.

Apparently, the Sky City is not the limit. 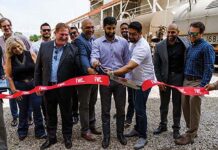