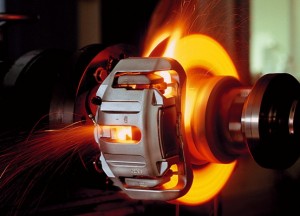 Continental has announced plans to invest more than $35 million in its Henderson, NC facility and create an additional 40 new jobs over the next five years. The driving force behind this investment is the increased demand in Electronic Integrated Parking Brake (e-IPB) production.

“With this investment, we will be able to increase our current volume to support a growing market, improve our manufacturing processes and prepare for additional production demand in the future,” said Jeff Scott, plant manager of the Henderson facility. “Today’s announcement shows Continental’s commitment to further automotive growth and development in the region.”

The manufacturing facility, located in the Town of Fletcher, currently employs more than 600 local residents and produces state-of-the-art brake calipers for automobiles and light trucks. The Henderson facility has experienced unprecedented growth in both business production and employment over the last few years.

Due to the increasing demand for brake calipers throughout North America, the Henderson plant produced a record-breaking seven million calipers in 2012. That production rate is estimated to jump to nearly 9 million in 2013 and this positive growth is expected to continue out beyond the 2014 time frame.

Contributing to this significant growth in production is the addition of five new vehicle platform customers that Continental now supports at its Henderson facility. In addition to these programs, the Henderson plant is working in conjunction with Continental’s Rheinbollen, Germany facility to launch simultaneously a new electro-mechanical caliper with integrated parking brake (e-IPB).

“The e-IPB Caliper will introduce new challenges to our Henderson team,” said Scott. “The assembly process relies heavily on robotics, integrated work cells, and high-tech programming. This is a great opportunity to improve our manufacturing processes and demonstrate the technical competence and adaptability of our employees.”

The Henderson plant is part of Continental’s Hydraulic Brake Systems Business Unit in the NAFTA region and has become a strong contributor in the company’s strategy to develop Foundation and Electronic IPB product segments in the region.