Home » Industry News » Automotive » Beam Me Down to L.A., Scotty 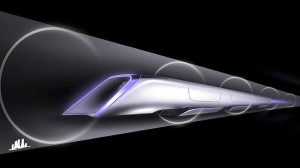 When we mused in this space last week about the headfirst dive of Amazon founder Jeff Bezos into the newspaper business, we assumed it would be a while before we focused again on an ultra-rich entrepreneur branching out in a bold new direction. We were thinking weeks or months, not days.

Well, Elon Musk forced us to make an exception. For a guy who looks like he’s barely old enough to shave, Musk’s track record as a 21st-century entrepreneurial genius speaks for itself:

Musk co-founded PayPal, the most widely used e-Commerce payment tool. He made a fortune selling PayPal to eBay, then used his fortune to create Tesla, the all-electric supercar hailed by many as the most incredible four-wheeled vehicle on the planet. Then he left the planet entirely, sending SpaceX rockets–the first privately built, reusable space-cargo carriers–to the International Space Station.

So when Musk talks, we listen. This week, the Tesla/SpaceX CEO stepped forward and took the wraps off Hyperloop, a 700-mph magnetic levitation train that would travel through giant elevated tubes and blast passengers from San Francisco to Los Angeles–a 350-mile journey–in an astounding 35 minutes.

You read that right: 35 minutes. That’s only a few minutes longer than it took Nomar Garciaparra to adjust his batting gloves between pitches. The current ground transportation record-holder, Shanghai’s Maglev Train, has only reached a top speed of 311 mph; it takes a snail-paced hour and twenty minutes to cover 350 miles.

Musk took a look at the $70-billion high-speed rail system recently proposed by the state of California and decided the Golden State is behind, not ahead, of the curve. According to Musk, the price tag is excessive (he estimated it would actually cost $100 billion) and the technology is too…20th century. And, assuming California can sort out the land rights for the ground-level system, it wouldn’t be operational before 2029.

Musk says he has a better idea, which he revealed on his blog this week. Prefacing his announcement with the caveat that his plan is “highly speculative,” Musk offered a breathtaking vision of a transportation system that would consist of aluminum pods hurled through elevated steel tubes mounted on columns 50 to 100 yards apart. The pods initially would be designed to carry people, but Musk believes he can make them big enough to carry cars.

In the Hyperloop’s low-pressure magnetic levitation (mag-lev) system, the trains would be mounted on thin “skis” made from outer-space-worthy alloys. Air will be pumped through holes in the skis to create an air cushion and superconducting magnets on the skis will levitate the pods. The system will be turbocharged with an electromagnetic pulse that will blast the pods through the tube (with booster charges along the route). Musk envisions up to 70 pods traveling from LA to SF and back at the same time (spaced five miles apart for safety), with a pod leaving the station every 30 seconds.

The good news: Musk thinks he can build a people-only Hyperloop for a measly $6 billion (barely more than the TV contract for broadcast rights to the LA Dodgers); the car-carrying version would cost $10 billion (less than the combined “bonuses” of bailed-out Wall Street swindlers). The really good news: tickets will cost less than air travel (or that Swiss bag Oprah didn’t get to see). The best news of all: no need for barf bags, since the ride on the air-cushioned Hyperloop trains will be smooth as silk.

In a press call following his blog post, Musk reportedly said he’s too busy with Tesla and SpaceX to bring the Hyperloop to fruition, but he may start work on a prototype. Highly speculative, indeed, but we wouldn’t bet against him pulling it off.

However, since we’re location specialists, we’ll offer some unsolicited advice on the proposed route of the first Hyperloop. Here’s the rub: there are a lot of people in Northern California who think Southern California should be a separate state (and vice versa). These folks probably won’t be queuing up for Hyperloop tickets.

On the other hand, there are thousands of Quebecois who vacation annually in Wildwood, NJ because it’s the closest venue that reminds them of the beaches of the French Riviera (or what they think the French Riviera is like based on books that have been handed down for generations in Canada). Wildwood has dozens of motels with French-sounding names like Fleur de Lis.

The current drive time between Montreal and Wildwood is 17 hours and 56 minutes. If they depart at 8 a.m., Hyperloop will get our friends from up North down to the boardwalk in time for a hearty French Toast breakfast, or perhaps some beignets with a side of salt water taffy.