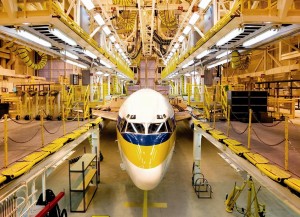 AAR Corp. Chairman and CEO David Storch have announced the company will establish a 750-job aircraft Maintenance, Repair and Overhaul (MRO) operation at Chennault International Airport in Lake Charles, LA. The aviation contractor will retain approximately 250 former employees of a predecessor, Aeroframe Services, while creating 500 new direct jobs. LED estimates the project will result in an additional 526 new indirect jobs in the area, for a total of more than 1,000 new jobs.

The company will occupy MRO service and administrative space plus additional space in Hangar H, a new high-bay, wide-body aviation hangar currently under construction at the airport. Louisiana committed $17.5 million toward construction of the $21.5 million Hangar H. The new hangar made Chennault a particularly attractive site for AAR’s major expansion into Louisiana.

“We appreciate the tremendous support from the Governor, the State, the Chennault International Airport Authority, local officials and the Louisiana Economic Development team in making this world-class facility available,” Storch said. “We look forward to meeting and engaging the talented pool of aviation professionals from the area and helping to extend Lake Charles’ position as an aviation center of excellence for Louisiana.”

“The AAR presence will expand the types and numbers of aircraft that will be worked at the Chennault facility,” said Executive Director Randy Robb of the Chennault International Airport Authority. “AAR selected the Chennault location based upon the fact that the facilities met their needs and because of the apparent teamwork they observed between the State of Louisiana, Calcasieu Parish, the City of Lake Charles and Chennault.”

The state provided a competitive incentive package to secure the company’s investment in Lake Charles, including the services of LED FastStart® – recently ranked the best workforce development program in the nation for the fourth year in a row by Business Facilities magazine – as well as a performance-based grant of $2.0 million to reimburse capital investments in tooling and other equipment at Chennault needed to support AAR Corp.’s expanded operation. Additionally, AAR is expected to tap the state’s Quality Jobs and Industrial Tax Exemption programs.

The State of Louisiana also will partner with SOWELA to establish a national Aircraft MRO Center of Excellence there, which will support the training of employees and create a pipeline of talent for AAR and other aviation service providers in the region, such as Northrop Grumman. The State will provide $3.7 million in funding for enhancements to the curriculum in structures, systems and avionics; replacement and expansion of technical training equipment needed for these programs; accelerated hiring of national-caliber talent to provide leadership and training expertise for the program; and updated aerospace labs for students to practice and qualify for certification and jobs through hands-on lab work. Most of the funds will be allocated to basic instructional equipment (e.g., tools, tables, audio-visual technology, instructional materials) and advanced equipment (specialized training equipment for avionics, structures, and systems).

“Lake Charles is very proud to welcome AAR to Southwest Louisiana and to be a part of its global aerospace network,” said Lake Charles Mayor Randy Roach. “This announcement is also great news for the men and women who have worked so hard in recent years to prove to the aviation industry that we can compete in the business of maintaining and repairing airplanes. Our commitment as a city is to build on that track record and do whatever we can to continue to support Chennault as a regional center of aviation excellence.”

“SWLA will see increased growth in aviation jobs with today’s announcement,” said President and CEO George Swift of the Southwest Louisiana Economic Development Alliance. “As we work to diversify our economic base, aviation is a key component and we welcome this potential growth. We welcome AAR Corp. to our region.”

Headquartered near O’Hare International Airport, AAR employs approximately 7,000 people at more than 60 locations in 17 countries. The company provides aviation services for large commercial airlines, including American, Delta, United and Southwest Airlines; cargo carriers, such as DHL, UPS and FedEx; and governments and militaries, including the United States, the United Kingdom, Japan, Turkey and others.