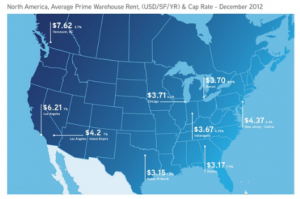 Colliers market experts point to increases in industrial demand, specifically in Asia and the Americas, and highlight causes for stagnation in other areas:

“While the North American market has seen solid performance, from a global perspective, industrial market activity has been somewhat patchy through the first half of 2013,” said KC Conway, Chief Economist | USA.  “While markets like Hong Kong and Sydney are nearing full occupancy, other markets like Seoul are experiencing uneven industrial demand. Latin America and EMEA are also working to manage some imbalance in supply and demand. Through the end of the year, we expect to see market resilience, increased demand for logistics and distribution center space, and development driven by build-to-suits.”

A full version of the 23-page report, including a list of the top 10 industrial warehouse rents and cap rate averages around the world, is available by clicking here.

Manufacturing February 3, 2023
The GE Appliances investment will create 45 new jobs over the next five years and is expected to be complete by the first quarter of 2024.