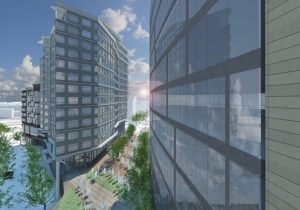 Designed by architecture and master planning firm The Architectural Team for Boston developer John Rosenthal, the massive five-building, 500-unit complex recently received the final approval from Boston’s Department of Transportation. This follows more than five years of legal and bureaucratic wrangling that have thus far kept the project from becoming a reality.

Now there could be steel in the ground at the 4.5-acre site around the intersection of Brookline and Beacon as early as this fall.

The Architectural Team’s design for Fenway Center incorporates facilities in a transit-oriented development adjacent to the new Yawkey Commuter Rail Station, connecting and integrating the new buildings into the existing Fenway, Kenmore, and Longwood Medical Area neighborhoods. The plan respects the urban grid and adds significant greenspaces for community enjoyment.

“Fenway Center is a significant mixed-use transportation-oriented development project that will help to knit back together Boston’s Fenway, Kenmore and Longwood Medical neighborhoods, which have long awaited this vital economic, social and urban revitalization,” says Michael Binette, AIA, NCARB, Vice President and Principal of The Architectural Team. “Our aim was to ensure that the master planning and design embodied our client’s mission of transforming an unsightly and underutilized asset of the city into a vibrant and sustainable economic hub.”