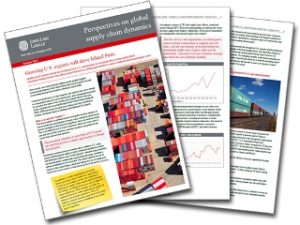 The growth of U.S. exports, especially to countries such as China, has put a spotlight on the need for strategic inland ports across the United States, according to Jones Lang LaSalle in a new white paper exploring supply chain dynamics. Inland ports, which traditionally focus on moving and handling imports, are also facilitating the effective movement of goods outside the U.S.

“Inland ports are becoming a critical part of the nation’s import/export cycle and the country’s competitive position on the world stage,” said John Carver, Head of Jones Lang LaSalle Ports Airports and Global Infrastructure (PAGI) group. Inland ports are hubs designed to move international shipments more effectively between maritime ports and locations throughout the U.S. interior. They are connected by dedicated rail lines to one or more seaports.

“Shippers are using inland ports to move their goods to market as efficiently as possible, and with fuel costs rising, they provide intermodal and rail options to bypass expensive and costly trucking methods,” said Carver. “Given the rise in containerized shipping methods, inland port shippers are also re-using overseas containers after they are emptied, as another method of supply chain optimization.”

This trend is being seen in one of the country’s fastest growing export industries, agriculture. The last two years have been the strongest for U.S. agricultural exports in history. China has a growing appetite for raw agricultural products such as wheat, soybeans, corn and hay.

“The current challenge for U.S. producers and suppliers is to have an effective supply chain infrastructure in place to manage the growth in export volume, both in the near future and for the long run,” said Rohan àBeckett, Vice President,  PAGI.  “Shippers are beginning to take advantage of this glut of empty containers in the U.S. as a low-cost solution for shipping exports to China. Not only does this contribute to economic growth by helping close the trade gap with China, but it will boost industrial real estate prospects as demand for storage and distribution space will rise.”

The agriculture industry will continue to be a major contributor to overall export volume from the U.S., thereby providing a long-term user base for inland ports and their outbound containers.

Critical to their success is their connectivity to rail and seaports and being able to provide manufacturers with smooth and quick intermodal trans-loading. Their location is vital. Many of the country’s inland ports are located in the Midwest, including Chicago, Memphis, St. Louis and Kansas City. There are a number of new locations under development such as the 4,000-acre Florida Inland Port in St. Lucie, FL., and the 580-acre Inland Port Arizona in Casa Grande, AZ., which will become the first inland port to serve the ports of Los Angeles and Long Beach.

“There are multiple real estate prospects as the logistics industry and exporters focus on hubs with immediate proximity to empty import containers, and to distribution hubs for shipment by rail to deep-water ports,” said àBeckett. “The trend toward establishing and expanding inland ports will continue, and there are major opportunities for private-sector development and investment to support the country’s growing export trade.”