Home » Magazine » Inside LiveXchange » LIVEXCHANGE 2013 KEYNOTE: Self-Reliance Will Save Lives 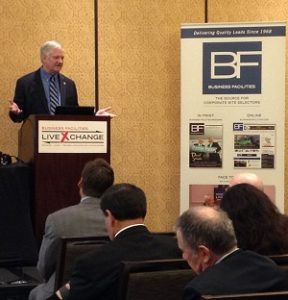 In the new normal of more frequent and increasingly dangerous natural disasters, communities can no longer assume that the government always will save the day.

This was the message that former regional FEMA director John Copenhaver delivered in his keynote address at the ninth annual Business Facilities LiveXchange event held this week at the Westin Stonebriar in Dallas, TX.

“For several years now, we have been in a time of diminishing national and local resources,” Copenhaver said, noting that the FEMA budget was slashed in the most recent round of federal spending cuts.

Speaking to LiveX attendees just a few days after several deadly tornadoes ripped through the region,  the former FEMA director stressed the need for self-reliance when preparing to meet today’s looming disasters. “Approaching threats may require immediate action, and ‘wait until help arrives’ could do more harm than good,” he said.

Copenhaver urged businesses to be proactive in disaster response planning. “You need to know the right people to call and which buildings are going to be safe to search. You also need to know whether the right plan is to evacuate a site or the opposite, to bring people inside,” he said. “Self-reliance has to be where it starts. If you want something done right, do it yourself.”

LiveX attendees, including site selection professionals and representatives of major economic development agencies, were urged by the keynoter to conduct an extensive risk analysis of candidate sites for new facilities or relocations. Copenhaver urged them to seek out established businesses in an area they are considering as a facility location and question them about the adequacy of disaster response resources.

“You need to know the site history. For example, has the topography changed? If open ground has been paved over for large parking lots, an area that did not flood 30 years ago may now be flood prone,” he explained.

A site should be evaluated in terms of how critical infrastructure, including power, water and waste disposal could be impacted by a major disaster. Special considerations, including the storage of toxic chemicals, should be investigated.

Copenhaver encouraged professional site selectors to seek out crisis management experts and contingency planners to assist them in risk assessment.

Asked to explain the primary reasons for the government’s poor response to Hurricane Katrina, the former FEMA director said the agency was ill equipped to deal with what he termed a “cascading catastrophe,” in which a hurricane caused levee failures that ended up flooding New Orleans. “Katrina is now a textbook example of a really bad response,” he said.