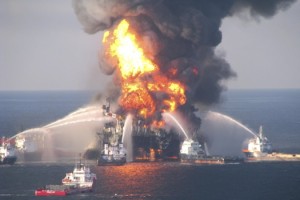 Next week, it will be exactly three years since BP’s Deepwater Horizon drill rig exploded in the Gulf of Mexico, killing 11 people and setting off the worst offshore oil spill in U.S. history.

By the time the damaged wellhead was capped–nearly three months after the explosion–more than 5 million barrels of oil had leaked into the Gulf. That’s almost 20 times more than what seeped out of the Exxon Valdez off the coast of Alaska in 1989.

The five states that were impacted by the Deepwater Horizon disaster (including 665 miles of contaminated coastline), Gulf Coast business owners, the federal government and BP have spent the past three years dancing a slow legal tango that has assessed clean-up costs, fines and other liabilities.

The British oil giant estimates its overall liability for the catastrophe could eventually top $42 billion; BP has sold off significant assets to generate cash for the payouts.

In December, a federal judge approved the Deepwater Horizon Economic and Property Damages Settlement agreement, which covers individuals and businesses in Louisiana, Mississippi, Alabama, and certain coastal counties in eastern Texas and western Florida, as well as specified adjacent Gulf waters and bays. BP says it has set aside about $8 billion to cover these economic and property damage loss claims (the agreement does not set a cap on the liability), of which about $1.87 billion has already been paid out (the overall settlement includes a guaranteed $2.3-billion fund to compensate seafood industry businesses damaged by the spill).

Meanwhile, a trial underway in New Orleans will determine civil claims under the Clean Water Act which could amount to more than $17 billion; billions more could be assessed after damage claims from Gulf Coast states are adjudicated; and a third set of claims covering natural resource damage has yet to be filed.

While the overall scope of the settlements is still taking shape, a bureaucratic framework has been put in place to distribute these funds.

In 2011, the  RESTORE Act established a Gulf Coast Ecosystem Restoration Council, which is comprised of governors from the five affected States, the Secretaries from the U.S. Departments of the Interior, Commerce, Agriculture, and Homeland Security as well as the Secretary of the Army and the Administrator of the U.S. Environmental Protection Agency. The Gulf States recommended and President Obama appointed the Secretary of Commerce as the Council’s Chair.

The RESTORE Act dedicates 80 percent of all administrative and civil penalties related to the Deepwater Horizon spill to a Gulf Coast Restoration Trust Fund. It specifies that these funds can be utilized “to restore and protect the natural resources, ecosystems, fisheries, marine and wildlife habitats, beaches, coastal wetlands and economy of the Gulf Coast region.”

The RESTORE Act sets forth the following framework for allocation of the Trust Fund:

State and local economic development officials throughout the Gulf Coast region are gearing up to receive their share of the Deepwater Horizon disaster trust fund.

According to state officials, Mississippi was the first state to come up with a dedicated plan to use these funds. Gov. Phil Bryant came forward with a GoCoast 2020 plan that lays out how Mississippi will spend its share of funds from the Restoration Council.

Here are some of the projects in Mississippi that eventually may be built using BP disaster funds, as reported by the Mississippi Press (GulfLive.com):

Pascagoula, MS is considering a $24.2-million riverfront project which would include Point Park, a beach promenade, Yazoo Lake channel dredging, Inner Harbor repairs and adding public access and a restaurant at Spinnaker Point. Another $424-million project would acquire riverfront property, relocate the wastewater treatment plant, complete Lighthouse Park and connect the bayou north of Lake Yazoo to the lake for improved drainage. A proposed $7.6-million project would convert Lowry Island into a recreational harbor.

Here’s hoping the improvements funded by the Deepwater Horizon settlements outlast the damage to the ecosystem of the Gulf of Mexico and the Gulf Coast wrought by BP’s big oil spill.