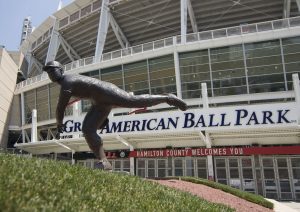 The people out in Kansas still peering over snow drifts will probably find this hard to believe, but the baseball season starts on Monday.

When the umpires shout “Play Ball!” for the first time this spring, much more than depressed winter spirits will be lifted. The coffers of communities that are home to major league ballparks also will fill up with fresh new greenbacks. More often than not, baseball and economic development go hand-in-hand, like hot dogs and beer.

A blog post on kypost.com this week offers a good example. It takes a close look at the ripple effect when baseball’s oldest franchise, the Cincinnati Reds, take the field at the Great American Ball Park.

The team is an economic boon for businesses in the city.  Downtown taverns enjoy a huge increase in business when the team plays at home and nearby hotels book dozens of extra rooms. There are more than 2,100 people employed at the ballpark and nearby Hamilton County-owned parking garages. During the Reds’ 2012 season, the team had attendance of more than 2.3 million people for its home games, with an estimated half of the fans coming from outside the Greater Cincinnati region. Local officials estimate the Reds’ overall economic impact at more than $200 million annually.

But Hamilton County, OH is still struggling to amortize the cost of building Paul Brown Stadium for the Bengals, GABP for the Reds and the adjacent riverfront garages. County commissioners have responded by cutting in half a property tax rollback that was part of the stadium sales tax authorization in 1996 and voting in favor of using casino tax revenues this year to help balance the fund.

County officials are quick to point out that the stadiums in Cincinnati also have drawn non-sports development projects to the thriving riverfront area since they opened.

There are a growing number of fiscal watchdogs who call these extrapolations foul not fair. With public financing of billion-dollar stadiums a major sore point in an age of fiscal austerity. the naysayers are getting louder. They say the return on this investment is never comes close to matching the cost of building these facilities.

The fiscal whistleblowers point to the public financing of the Miami Marlins $634-million stadium as Exhibit A of what can go wrong. The $91 million in bonds that were floated to build the Marlins dazzling (some say garish) art deco home–featuring one of the largest and fastest-moving automated roofs in the world–have been the subject of an SEC investigation, with financial analysts warning it may eventually cost Miami $2.4 billion to retire the debt from the project. Meanwhile, Marlin’s owner Jeffrey Loria shipped off most of the team’s stars in an offseason fire sale that is not likely to keep many seats filled at the new stadium.

Fortunately, the Miami debacle is an exception rather than the rule. It’s a close call, but we think as long as communities don’t overextend themselves in financing major sports facilities–in other words, make the team owners pay their fair share –a professional sports stadium or arena is a safe bet to pay off a healthy return on the investment.

There’s one big caveat: you better put a good team on the field. We’d say more, but it’s time to take our caps off, sing the National Anthem, grab a brew and Play Ball!