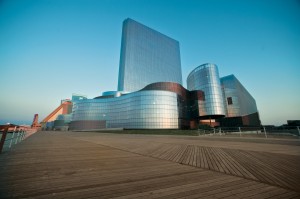 This week, New Jersey Gov. Chris Christie doubled down on his commitment to revive Atlantic City’s ailing casino industry. Christie signed a bill authorizing Internet gambling in the Garden State, enabling people to play casino games on their mobile phones and laptops. Internet gambling in NJ will be routed through servers in Atlantic City casinos and be available only to people using the Web in New Jersey.

The online gambit is the first of a series of initiatives that state lawmakers and casino hotels hope to enact to give AC some extra juice. This effort has taken on an added sense of urgency in the wake of this month’s announcement by the luxury resort Revel that it is filing for bankruptcy protection. The gleaming $2.6-billion Revel is the first new casino hotel to open in Atlantic City since 2003. When investors threatened to abandon the half-built luxury tower in the middle of the Recession, Gov. Christie stepped in with $261 million in tax incentives to save the project.

Hotels in Atlantic City are experimenting with in-room gambling, which enables guests to place their bets with the ease of opening a minibar or ordering an on-demand movie. Lawmakers from counties north and west of Atlantic City also are promoting the concept of “pop-up” casinos which would be authorized to operate at concerts, sporting events and county fairs.

Perhaps the largest surge in new gambling will happen if New Jersey wins its ongoing fight with the federal government over sports betting.

A federal law enacted in 1992 currently limits sports betting to four states — Oregon, Delaware, Montana and Nevada (where it’s a $2.9-billion industry). Ironically, the 1992 Professional and Amateur Sports Protection Act is also known as the Bradley Act, because it was written by then-Sen. Bill Bradley of New Jersey. Bradley, the former Knicks and Princeton basketball star, successfully argued that a broad expansion of legalized sports gambling would open the door to corruption, including the point-shaving scandals which have periodically tainted college hoops.

Bradley’s position was in line with the majority of voters in the Garden State at the time. New Jersey was slow to embrace legalized gambling: state voters rejected a referendum in 1974 which would have allowed casinos statewide; they narrowly approved a measure two years later which restricted casinos to Atlantic City. The measure passed only after small business owners in the famous beach town, once known as the Queen resort of the Atlantic Coast, traveled up and down the state convincing voters that only casinos could save their declining city.

But with casino gambling and expanded lotteries proliferating throughout the country during the past thirty years, acceptance of gaming has grown and NJ residents have sent a strong signal they’re ready to fight for a bigger share of the betting pie.

New Jersey voters overwhelmingly approved a 2011 referendum to legalize sports betting. Christie signed the law, but it was quickly challenged in court by the federal government, backed by professional and collegiate sports leagues. The lawsuit is still pending, but Christie has vowed to move ahead with sports betting this year, essentially daring the Feds to enforce the ban.

State lawmakers say sports betting is essential not only to boost AC casinos but to keep New Jersey’s struggling racetracks — an industry which supports 7,000 jobs and brings in about $110 million per year in tax revenue — from going the way of the dinosaur.

Not everyone is cheering the introduction of online gaming in NJ. The Council on Compulsive Gambling of New Jersey is warning the move will exacerbate the incidence of gambling addictions in the Garden State.

“Increased access to gambling increases the incidence of gambling addictions, and the Internet could not be more accessible. It’s going to accelerate the progression of problems for people who are already at risk,” Donald Weinbaum, the council’s director, told The New York Times.

New Jersey’s casino industry has been battered by the triple whammy of relentless expansion of competing gaming hubs in nearby Pennsylvania and Connecticut (with New York preparing to enter the fray), a deep Recession that shriveled the amount consumers are willing to spend on entertainment and, most recently, a monster superstorm that devastated the Jersey Shore.

Recognizing the high stakes if Atlantic City’s casinos continued to falter, Gov. Christie intervened in 2010 with a five-year plan to prop up AC by creating a special tourism district around the casinos and a $30-million marketing plan. State police units were deployed around boardwalk casinos to keep crime from the depressed inner city from impacting on casino business. While these efforts have helped to stabilize Atlantic City’s casinos, Gov. Christie’s embrace of online gaming signals his recognition that NJ must compete for all forms of gaming revenue: he is betting that a rising tide of wagers will lift all boats.

It will be interesting to see if the governor’s big bet on Web gambling pays off. Other industries that opened their arms to e-Commerce have experienced considerable collateral damage to their bricks-and-mortar businesses after they welcomed an onslaught of electronic purchasing.

Big Box electronics chains like Best Buy were forced to undertake slashing reductions of their in-store sales force last year after a surge in online purchases of electronic devices. The tech-gadget retailer discovered that more and more shoppers were coming to the store just to pick the brains of their sales staff and sample products, but were not opening their wallets until they got home and logged on for tax-free Internet purchases.

Will New Jersey gamblers be inspired to make the trek to Atlantic City if they can simply place their bets on smartphones from an easy chair at home?

Online gaming no doubt will create more gamblers. If it’s expanded to include sports betting, our guess is these new bettors soon will gravitate to Atlantic City’s gambling palaces and state racetracks. Gambling is an inherently social activity, and sports gamblers in particular will find it hard to resist the multi-screen, mega-sports betting parlors that will quickly be installed in AC casinos and state racetracks if the federal ban is breached. They’ll want to cheer their teams together, bragging about their winnings and making fun of losers in person, even in our strangely disconnected age of total mobile connectivity.

Then they’ll take those winnings, double down at the nearest blackjack table or horse-picking window and lose the whole wad. And they’ll come back a week later and try to win it all back. (Of course, we’re not speaking from experience here, but we’ve heard stories).

Even if the surge in visitors is modest, the tidal wave of new gaming receipts from every corner of the state will move the bottom line of New Jersey’s casino and racetrack industries from red to black. Our governor, who likes to do things in a bold way, has pushed a big pile of chips into the middle of the table. It says here the odds are good that his big bet will pay off.