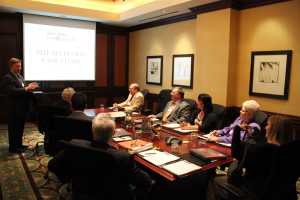 Despite the ominous presence of Hurricane Sandy churning up the East Coast, LiveXchange went off without a hitch, offering attendees the opportunity to engage in a series of one-on-one meetings as well as numerous informal networking opportunities at one of the premier resorts on Florida’s west coast.

By the time BF Chief Business Officer and Group C Media co-President Ted Coene gave his closing remarks on Oct. 30 — inviting all present to mark their calendars for LiveXchange 2013 at the Westin Stonebriar in Frisco, TX — many attendees had weighed in on the 2012 event, declaring the Florida conclave an unqualified success.

“This is a tremendous event,” said Mike Michalski, president, MCS Strategies. “LiveXchange is an excellent opportunity to get critical information from a number of states and locations for our projects.”

Steve Bonine, DuPont’s manager of Global Grants and Incentives, said the customized itineraries created for attendees at LiveXchange provided an unparalled opportunity to explore dealmaking possibilities. “It gave us a lot of one-on-one time that let us get more in-depth with service providers than we’re used to,” he said. “It was time well spent for me.”

The custom itinerary at LiveXchange also impressed Matt Harrington, director of Piedmont Triad Partnership. “They do a great job scheduling appointments. I had 13 appointments over two days, which is a fantastic opportunity to get in front of companies and site consultants that have active projects,” he said.

“It’s like speed-dating, and it works,” added Robin Spinks, a partner at Greenfield Consulting. “I like the combination of seminars and one-on-one meetings. I’m going home with a stack of information and great contacts. This has very much exceeded my expectations.”

Newark, NJ’s Brick City Development Corp., which first attended LiveXchange in 2011, came back this year after assessing the impact of this unique gathering. “LiveXchange lets us know how the site location advisors think and it puts our city on their radar,” BCDC CEO Lyneir Richardson said. “Most important, it makes sure our location is being considered, which over time hopefully will result in a new deal.”

LiveXchange 2012 was kicked off with a nostalgic keynote from NFL Hall of Famer Jack Youngblood, who chronicled his meteoric rise from a kid playing Pop Warner football in Florida to a top pick in the NFL draft and a stellar career as a 5-time All-Pro linebacker and defensive captain with the Los Angeles Rams.

Youngblood recounted how Deacon Jones, an anchor of the Rams’ memorable “Fearsome Foursome” line, took him under his wing as rookie. “The next thing I knew, Deacon was traded and I was taking his place,” he said.

Youngblood, who played 14 seasons in the NFL and a record 201 consecutive games for the Rams, was the 20th pick of the 1971 draft. His career culminated in an appearance in Super Bowl XIV in 1979, when he took the field wearing a cast on a fractured left fibula he sustained in an earlier first-round playoff game. Even with a broken leg, Youngblood appeared in every defensive play of the 1979 Super Bowl, which the Rams lost to the Pittsburgh Steelers. The soft-spoken Hall of Famer attributed his success to a higher power.

“God had his hand on my shoulder,” he said.

Youngblood noted that sports franchises often are scouting new locations, and he advised his audience of economic development representatives to go the extra yard to entice new projects. “You need to have the right infrastructure to attract businesses,” he said.” You need to offer something better than the competition. You need to provide the opportunity to expand to accommodate success.”

Although he played before the era of huge salaries in professional sports, Youngblood added a caveat that rings true in today’s mega-bucks market for athletes (and new facilities as well):

“If you write a big enough check, people will come,” he declared.

This year’s LiveXchange lineup of industry experts included a presentation by Mark Williams, president of Strategic Development Group, who shared insights on the capital investment decision process developed during a 23-year career in economic development with a firm involved in more than $2 billion worth of project development. Williams gave attendees some sage advice about maintaining an appropriate perspective when evaluating a bevy of enticing incentives offered by candidate locations to lure big-ticket projects.

“If incentives are the first thing put on the table – before critical site selection factors are discussed and considered – you could have a problem,” he said. “You can’t let incentives drive you to go to places you shouldn’t be going to.”

In a high-level workshop focused on best practices for negotiating incentives, land, and energy costs for major projects, Williams stressed the importance of nailing down the particulars of site readiness, logistics, workforce availability and the basic financial case for the location before assessing the inducements that locations serve up to close the deal. And when incentives are considered, he added, they should be carefully examined to determine whether these inducements address non-recurring or recurring costs associated with putting a facility in a new location.

Williams also cautioned the workshop attendees to keep their ears tuned to any hints of discord between economic development departments and the public officials they report to. ”If the mayor and the economic development director aren’t getting along, you might want to cross that candidate off the list,” he said.

The absence of representatives from higher education resources at candidate locations also should be noted, he said, as these resources are critical to establishing the availability of a skilled workforce.

Burghard: Evaluate Locations By What They’re Striving to Become

Ed Burghard, CEO of The Burghard Group, shared data from Xavier University’s American Dream Composite Index and explained how to use this metric to evaluate an economic development organization’s performance.

“The goal for economic development strategic planning should be to increase the degree to which the American Dream is being realized by people living in the community,” he said. “”It’s not just about jobs. It’s about economic prosperity, well-being, diversity, society and the environment.”

A community’s image is “the perception of it’s promise,” Burghard added. “A community’s identity is what it is striving to become. Every community needs a 10- to 15-year strategic plan to bridge the gap between its image and desired identity.”

Tobjy’s presentation, the closing session at LiveXchange 2012, summarized the findings of KPMG’s Competitive Alternatives study, a two-year report which examines 19 industries in more than 100 cities and 14 countries.

Business Facilities’ invitation-only LiveXchange event brings together corporate executives responsible for choosing a new location for their companies’ next facilities. These delegates – who come to the event bearing pre-certified projects in the midst of the site search process – meet with economic developers from across North America in a series of one-on-one sessions that offer the opportunity to move forward on site selection decisions and lay the foundation for future project development.