By Dominique Cantelme
From the September/October 2012 issue

From the people to the technology and the resources to the components, the system that moves a product from the supplier to the customer involves many steps. A process needs to be in place to move materials, services, people or any other “product” from point A to point B and possibly all the way to Z. Sophisticated planning is required to account for never ending variables that help to keep supply chain costs down and quality and profits up. Logistics incorporates the complexity of integrating information, transportation, inventory, warehousing, material handling and packaging. It is the largest business practice a company has to manage and to be deemed successful and efficient it should be done in a cost-effective, timely, safe and secure fashion.

According to the Council of Supply Chain Management Professionals’ (CSCMP) 23rd Annual State of Logistics Report (authored by transportation consultant Rosalyn Wilson of Delcan, Inc.) total U.S. business logistics costs include three main categories: Inventory Carrying, Transportation and Administration. The report reveals that this number rose to $1.28 trillion in 2011, a 6.6 percent increase from the previous year and a 17 percent increase from 2009. This accounts for 8.5 percent of the country’s gross domestic product (GDP), bringing us back to 2003 levels.

Titled “The Long And Winding Recovery,” the report reveals that U.S. exports of goods and services increased by 14.5 percent in 2011 to $2.10 trillion, while imports increased 13.8 percent to $2.66 trillion. 2011 also saw U.S. exports of manufactured goods reach a record $1.27 trillion, up 15.1 percent from 2010. Industrial supplies represented the largest goods export category with a record $499.5 billion worth of exports followed by capital goods with a record $491.4 billion. Record amounts of gasoline, heating oil and diesel were also exported to meet higher global fuel demand, while U.S. fuel consumption dropped.

The Railroad sector was the big winner with a 15.3 percent increase from 2010 to 2011, particularly gaining market share in intermodal. Trucking, which comprises 77 percent of the transportation component, posted a 6.2 percent rise with companies also using intermodal rail help to offset the impacts of driver shortages and the costs of acquiring and maintaining new equipment. The air cargo sector experienced a decline, with domestic revenue down more than 3 percent compared with less than a 1 percent decline in international revenue. The International Air Transport Association (IATA) continues to expect net post-tax profits for the entire industry to fall from $7.9 billion in 2011 to $3 billion in 2012, which is just 0.5 percent of revenues. Ocean cargo also experienced decline with excess capacity, rate erosion, service declines and operational losses.

The United States has the largest freight transportation system in the world. It is comprised of 3.9 million miles of public roads and two million miles of oil and natural gas pipelines. There are networks with 120,000 miles of major railroads, more than 25,000 miles of commercially navigable waterways and more than 5,000 public-use airports. The highway network consists of four million miles of roads and streets with about 600,000 bridges and the transit system is operated by more than 5,000 public transportation systems with 129,000 active service vehicles. But whether traveling by land, air, track or sea, locating in the right area can be a company’s biggest time and profit saver.

Hoosier Energy: Service in a Logistically Magnetic Region
The Hoosier Energy service region is so well suited to the logistics industry that in just the last six months of 2011 five logistics projects in the areas around Indianapolis, Louisville and Greensburg (home of Honda’s auto assembly plant) were announced, as new and existing facilities grew to take advantage of the many favorable factors that southern and central Indiana and southeastern Illinois offer to logistics and distribution companies. 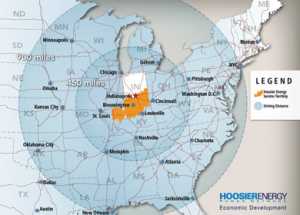 The communities that are served by rural electric cooperatives in this region have the advantage of proximity to the vast majority of the United States population. Within a 900 mile drive of Hoosier Energy services are communities from Dallas to Jacksonville and New York City to Minneapolis. Interstates 64, 65, 70 and 74 all provide access to points along some of the most vital highway corridors east of the Mississippi. In addition, by the end of 2012 a new interstate—I-69—will be open for traffic in southwestern Indiana, a brand new highway that opens up new territory for potential logistics facility sites.

Both Indianapolis and Louisville have established reputations for being communities that logistics projects must examine as potential sites; business parks filled with large distribution centers are available in many communities, and UPS in Louisville and FedEx in Indianapolis are key parts of the air shipping industry. Amazon recently announced that another one of its facilities would spring to life in Indiana as well.

Not only is there a deep pool of existing workers who have experience in the logistics field, but education facilities throughout the Hoosier Energy region also have begun to develop training curriculum materials that are specifically tailored to meet the needs of logistics firms. Six Indiana high schools have started using an Advanced Manufacturing and Logistics (AML) curriculum that is a mixture of hands-on, project-based, and online lessons that will lead to better prepared students who will have logistics training as they enter the work force. Ivy Tech Community College has worked with the AML curricula to position the students for relevant certifications and associate degrees related to logistics.
And the cost of doing business in the communities the Hoosier Energy cooperatives serve is another attractive advantage. According to the Council for Community and Economic Research, all the areas in the Hoosier Energy region have costs that are below the national average composite price index.

The regional business climate is so favorable that businesses of all sorts are expanding in these communities. In the past six years almost 300 business attraction or expansion projects on rural electric served sites led to the announcement of 12,500 new jobs to be created. Automotive parts suppliers, food processing firms and furniture manufacturers—all are flocking to the pro-business region that is serviced by Hoosier Energy.

Low costs, trained labor, available sites and proximity to interstates and the eastern U.S. population—these are the factors that have made the Hoosier Energy region a powerful magnet for new business.

The Joplin Metro area in southwest Missouri is in the center of North American markets. Major metros such as Dallas, Kansas City, St. Louis, Tulsa, Little Rock and Memphis are just hours away. Transportation to those markets is efficient thanks to Interstate highways and substantial rail connections. Commercial air service is available at Joplin Regional Airport and three other major airports within 90 minutes drive time.

Companies in the Joplin Metro area benefit from a productive, available labor pool of more than 93,000 people. Missouri Southern State University (MSSU) in Joplin offers a broad range of standard and business-specific classes as well as a strong industrial technology program. Crowder College is a source for customized technical training. Overall, between the Joplin schools and MSSU, more than $100 million has been spent on educational facilities.

Joplin’s quality of living is enhanced with two major regional medical centers, more than 150 restaurants and a wide variety of retail options from locally owned shops to the 114-store Northpark Mall.

With Walmart’s headquarters in nearby Bentonville, AR (just 45 miles away), Joplin is well positioned geographically to serve as a distribution center for suppliers who have a directive to provide just-in-time deliveries. Joplin is located within two hours of six Walmart centers, which gives the region a logistics advantage for supplying the Walmart system, the largest retailer in the U.S.

The Joplin Metro area’s position for serving national markets is nearly as advantageous as Chicago or Kansas City. Interstates 40 and 44 (east-west) and US Highway 71 (north-south) connect to every region in the country. Four airports within 110 miles serve the region, providing commercial and cargo service to markets throughout the world. Two Class 1 and one local railroad are important parts of the transportation system. Both UPS and FedEx offer daily early morning deliveries in Joplin and Neosho through their regional hub in Springfield, MO.

The Joplin area already has several back office operations that have prepared a large pool of full- and part-time workers in this industry. Companies such as La-Z-Boy, General Mills and Owens-Corning transport their finished products from the area. 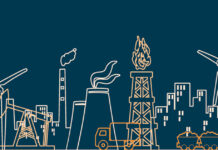 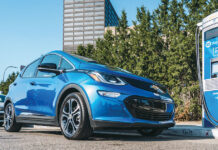 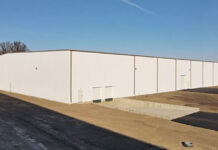