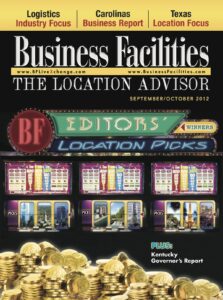 Business Report: Washington – Aerospace Suppliers Bringing Their Business To Spokane | Building on the success of this year’s aerospace/defense supplier summit, Spokane will host the 2014 confab.

Cover Story: Editors’ Location Picks  | It’s time to shine our spotlight on the up and coming locations that caught our eye and earned a place in our annual showcase. As usual, the task of winnowing the candidates was much tougher than singing their praises. Click the link to find out who made the cut.

Feature Story: Building A Jobs Bonanza In The Bluegrass State | From bourbon to advanced batteries, the Bluegrass State is executing a diverse development strategy and laying the foundation for long-term growth. Gov. Steve Beshear gives a high-level overview in the article.

Location Focus: Texas – BIG Heart, Country, Business | Put on your 10-gallon hat and see how the Lone Star State Continues to outperform the rest of the U.S. in job creation.

Business Report: The Carolinas – Carolinas Put Out Welcome Mat For Business From Far East | The governors of North Carolina and South Carolina are piling up the frequent flier miles seeking business from Asia.

Special Report: Two Train Cars Forward, Three Cargo Ships Back | Getting goods to market is a top priority in site selection decisions. Hop on board as we ride the big cargo routes.

Special Report: PSE&G Adds $883 Million T New Jersey’s Solar Power Push | New Jersey is second only to sunny California in installed solar power generation capacity—and its capacity is about to get bigger, thanks to an investment by the state’s largest utility.

Business Report: New York – Regional Councils: Engines For Growth In The Empire State | Here’s a road map to the sweeping reorganization that transformed economic development in the Empire State.

Location Focus: The Heartland Of America Beats Strong | A broad economic base, supported by strong infrastructure, brings business to the geographic center of the U.S. Check out this tour of the Land of Lincoln.

Industry Focus: Biotech – A Recession-Proof Growth Sector | While the U.S. was losing more than three million jobs, the biotech industry was creating 96,000 high wage positions. This story takes the pulse of this growth sector.

Feature Story: High-Tech Hubs Are Moving To Their Markets | Technology clusters are sprouting in unexpected places as everyone reaches for a piece of the 21st century tech jobs pie. Find out where the action is in this comprehensive look at locations that have put themselves on the high-tech map.

Inside LiveXchange: Staying Ahead Of A Rapidly Changing Curve | Anatalio Ubalde, co-founder/CEO of GIS Planning, will be a featured speaker at LiveXchange. 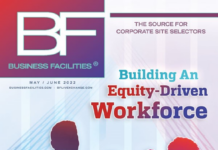