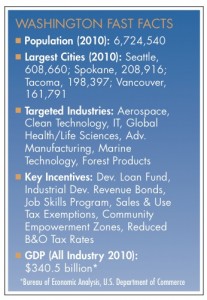 From the September/October 2012 issue

During the Governor’s Aerospace Summit in Spokane, Gov. Chris Gregoire announced that Washington will again be the venue for the Aerospace & Defense Suppliers Summit at the Washington State Convention and Trade Center, March 10-12, 2014. The event is the largest of its kind in North America.

The inaugural ADSS in the United States was held this past March in Seattle, and organized by French-based BCI Aerospace with the support of Boeing and the Washington State Department of Commerce. The event was a major success that exceeded expectations of organizers and participants. With more than 800 companies from 25 countries, ADSS is one of the world’s largest networking events connecting buyers and sellers in the global aerospace industry. 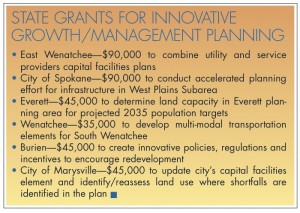 Since the summit last March, Washington companies that attended have reported $1.3 million in sales, and several million more dollars in contracts are in the works.

Gregoire also announced that through an executive order, she is disbanding the Washington Council on Aerospace and reassigning its duties to the Office of Aerospace, the Aerospace Workforce Pipeline Committee, the Joint Center for Aerospace Innovation, and the Washington Aerospace Partnership.

Gregoire created the council in 2009 to keep up with changing aerospace needs and demands—and credited the group with a healthy and growing aerospace industry. Since it’s inception, the Council has issued two annual reports to the Legislature and many of its activities and recommendations have been enacted. Additionally, several new and focused entities have been created to further the goals originally established for the Council.

“In short, the Washington Council on Aerospace has done such a good job of setting all this up that it has worked itself out of a job,” Gregoire said. “And to me, that’s the highest compliment you can pay. Three years after the Council convened, everybody involved agrees that the Council has served its purpose in helping to create new, more focused efforts, and now it is time to disband.”

Prior to speaking at the Governor’s Aerospace Summit, Gregoire toured Kaiser Aluminum’s Spokane Valley facility, where she also met with Kaiser executives and representatives of the Steelworkers Union to discuss the investments, workforce and products that reflect the new aerospace focus of the company.

Export Washington is a program developed by the State of Washington Department of Commerce to increase the number of small business concerns (SBC) which export, as well as to increase the value of goods and services currently being exported by SBCs. The program is funded in part through the U.S. Small Business Administration’s State Trade and Export Promotion (STEP) grant program.

The Export Voucher program is a key element of Export Washington. This program will reimburse eligible SBCs up to $5,000 for pre-approved expenses, such as training, marketing campaigns, trade show and mission expenses, business travel expenses, etc. to increase export sales. SBCs are required to provide a minimum 25% cash match, or up to $1,250 for a full $5,000 Voucher.

The program, launched in 2011, gives companies access to financial support and counseling and international trade and business development expertise. Enprecis, a data services provider, and B&G Machine, an industrial diesel remanufacturer, are among the more than 175 Washington companies assisted by the program. Trade-related activities supported by the STEP grant have generated nearly $19 million in new export sales for participating Washington businesses in just the first six months of the program.